Lefkandi is located on the west coast of Euboea between Chalcis and Eretria. Its ancient name is unknown. The settlement is situated on Xeropolis, a peninsula between two harbours, while Early Iron Age cemeteries—dated from the late 11th to the end of the 9th centuries bce—have been discovered on a hill in close proximity. Xeropolis was occupied since the Early Bronze Age and was a major Middle Bronze Age site. It is, however, during the Post-Palatial period (12th century bce) and the Early Iron Age that the site evinced its most well known period before its final abandonment around 700 bce. 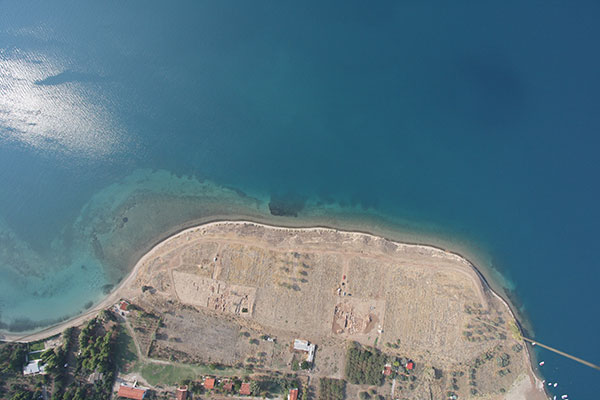 Xeropolis was remarkably thriving in the middle of the 12th century bce. Compared with other contemporary sites, it was enormous (some 10 hectares or more). The character of the settlement was “proto-urban” and benefited by its maritime activities and close contacts with other sites within and outside the Aegean. Houses were large and comfortable, divided by streets and alleys. Some of the houses might have had more than one storey and were equipped with hearths, clay storage bins, and extant vessels.

During this period, a substantial double wall marked the middle of the settlement, built next to an area where cult activities were performed from the middle of the 12th to the 10th centuries. Continuity from the Late Bronze to the Early Iron Age has also been observed in the eastern part of the tell, where a large rectangular building was constructed during the last stage of the Late Bronze Age and occupied for a long period of time. It might have served as the dwelling of one of the ruling families who resided at this location during the transition from the Late Bronze to the Early Iron Age.

The importance of the site stems primarily from the excavations of the cemeteries. So far, 193 tombs and 104 cremation pyres have been discovered in five separate burial plots. The offerings found in the tombs show the importance of the site during a period that is considered to be one of the darkest for most of the Aegean. The richest cemetery is that at Toumba, which is located to the east of a monumental apsidal building (50 x 13.8 metres). The building is dated to the middle of the 10th century and is earlier than any tomb found in the cemetery. Apart from its size, a remarkable feature of this building is that it has post-holes running along the north and south walls and round the apse. These supported a wooden veranda (peristrasis), which is the earliest example in Greek architecture and anticipates later uses in Greek temples. Even more remarkable was the discovery of two shafts in the central room of the building: one contained the cremated body of a man buried with his iron weapons and an inhumed woman with remarkable jewellery; the other held the remains of four horses. The cremated man was also given an astonishing garment found folded in the urn with his ashes. The urn was exceptional too: a large bronze crater, which was a magnificent heirloom from Cyprus engraved with hunting scenes. The woman's offerings included an even more ancient heirloom: a pendant that is dated to around 1600 bce and must have come from Syria. It is suggested that the man buried with the woman and horses was the leader of the local community.

After the destruction and the deliberate covering of the building and the burials with a mound, the area in front of the east entrance was used as a cemetery. This cemetery belonged to a distinguished elite group, which chose to display its wealth with rich offerings given to their dead, showing that the local elite had a taste for high quality goods—both locally produced and imported. Moreover, the further study of their burial rites reveals that they employed complex practices in their funeral display. For example, exceptional male burials at Toumba preferred to display their status as that of a warrior, taking with them their iron weapons and following the same “symbolic package” that was first established as suitable for male elite members since the funeral of the man in the Toumba building. Women were given offerings rich in gold ornaments and imported luxury goods. One of the most celebrated of all the offerings found in the tombs is the renowned figurine of a centaur. It is the earliest three-dimensional representation of a centaur in Greek art and most probably is the image of the famous Cheiron, since the gash on his left knee and his six fingers are characteristics attributed to this particular centaur. 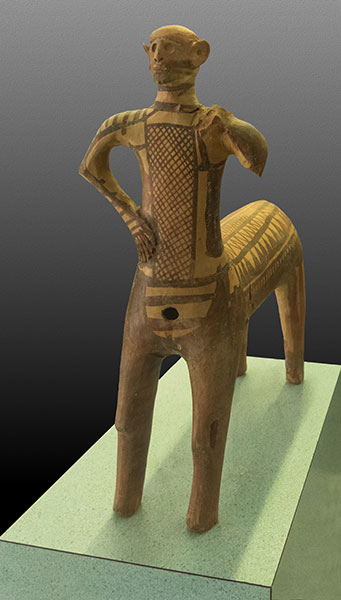 The combined evidence, from the settlement on Xeropolis and the rich cemeteries, provides valuable information about the community at Lefkandi and the important role it played for decisive developments in the formation of the new social and economic structures emerging after the end of the palatial period in the Aegean and before the rise of the city-states. Lefkandi, however, did not become one of them. The site was abandoned some time in the early 7th century. The reason for the desertion of the site is not known. It could be that Lefkandi was partly destroyed and abandoned after a war, perhaps even one recorded by the ancient historians (see, e.g., Thucydides 1.15.3). It is also possible that internal competition among the local elite groups finally led to conflict that resulted in the abandonment of the site or that some of the inhabitants moved to nearby Eretria and/or Chalcis. Others might have joined those who left their homeland for good and moved to the west—where some of the earlier emporia and apoikiai, such as Pithekoussai and Cumae, were founded by Euboeans (Strabo 5.4.9), according to tradition.