Seer and warrior, member of royal family of Argos, descended from Melampus. Son of Oecles, husband of Eriphyle, father of Alcmaeon (1) and Amphilochus. Unwilling participant in the expedition of the Seven against Thebes, whence he did not return. Consulted as an oracle and, from the later 5th century bce, as a healer, on the model of Asclepius.

Amphiaraus opposed the expedition against Thebes, knowing through his mantic foresight that it was doomed to failure. He was nonetheless forced to participate through the intervention of his wife, Eriphyle, who was also the sister of Adrastus (1). During an earlier quarrel between her husband and her brother, she had been empowered to decide disputes between them (Ap. Bib. 3.6.2; Diod. Sic. 4.65.6). Polynices, the Theban prince who was seeking Argive support for the attack against Thebes, knew of this arrangement and offered her a golden necklace in exchange for exercising her influence and forcing her husband to take part in the expedition (some variation on this is already alluded to at Od. 11.326–327, 15.247). The scene of Amphiaraus’ departure for Thebes was popular in art of the 6th century bce: Amphiaraus mounts his chariot even as he glares balefully at Eriphyle who stands nearby, often holding the necklace, while one or both sons appear as children, often reaching their hands out to their father.1 The reflection of tensions between husband and wife and the presence of the children hints at the tradition that Amphiarus’ son, Alcmaeon, committed matricide at his father’s bidding, a motif later exploited in tragedy. 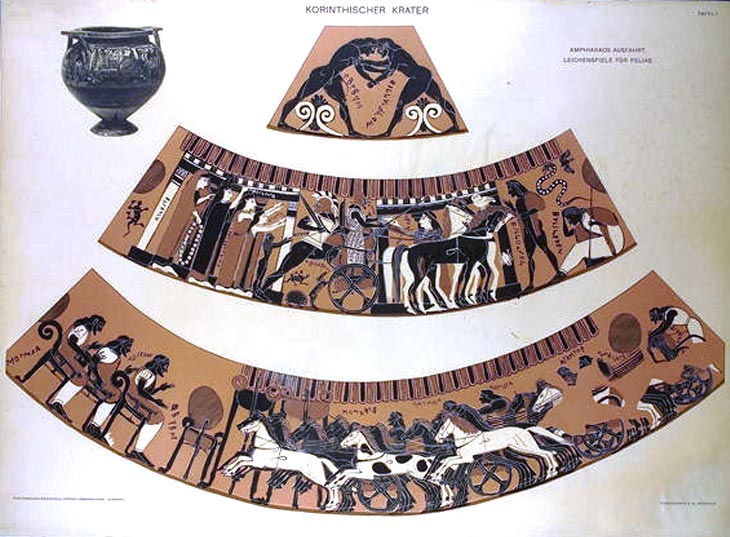 Early traditions may have seen Amphiaraus die with the other Argive leaders (Od. 15.247, 253)—except Adrastus (1) who survived—but more prominent is the account of Zeus striking the earth with his thunderbolt and causing a cleft to open and swallow Amphiaraus alive together with his chariot. This tradition may derive from the Thebais; the earliest surviving literary references are in Pindar (Pind. Ol. 6.12-17, Pyth. 8. 39–56, Nem. 9. 13–27, 10. 8–9) and the iconography appears at about the same time.2 The disappearance and association with the underworld appears to influence his presence in Etruscan art and in Roman reception of his myths (cf. Stat. Theb. 8.1-126, where Hades is alarmed and threatened by his sudden appearance).3 As Braswell puts it, “[t]he end of Amphiaraus was without doubt the high point of his career.”4

The account of the still-living Amphiaraus' disappearance into the earth is associated with his underground oracle (Strab.9.1.22) (see ORACLES, and compare that of Trophonius at Lebadea). According to Herodotus, the oracle was one of those consulted by Croesus—along with Delphi it gave the right answer—and by Mys (for Mardonius) (Hdt. 1.46.2, 1.52, 8.134). The location of the late archaic and early classical oracle is problematic: Amphiaraus’ major sanctuary was near Oropus, but Strabo (Strab 9.2.10) indicates that it was transferred there from an original site near Thebes. A majority of scholars accept Strabo’s model (e.g., Hubbard, Parker, and Sineux), but others (e.g., Schachter) doubt the existence of the original Theban site.5

The sanctuary at Oropus became popular during the Peloponnesian War, when the Athenians invested Amphiaraus with healing powers on the model of Asclepius. Consultation was by incubation: the consultants/patients bedded down on a ram-skin on the ground, and were visited by Amphiaraus as they slept (IG 7. 235 = IOrop 277). The sanctuary, which has been excavated, was popular in the 4th century bce under the Athenians, under the Hellenistic Boeotian Confederacy (when that body used it as a showcase for the display of proxeny decrees), and under the Romans, thanks to the impetus given by Sulla, who granted it tax-free status (cf. IG 7. 413 = IOrop 308).