Mycenae is a fortified palatial citadel located in the NE Peloponnese of mainland Greece that was occupied primarily during the Late Bronze Age. Its name is used for the Mycenaean culture of the mainland and for the relevant period, also known as Late Helladic. Mycenae was the largest, wealthiest, and probably most important palatial center on the mainland controlling a region surrounding it full of exploited natural and agricultural resources. Excavated almost continuously since the late 19th century, it is known for monumental architecture, the Cyclopean walls, the Lion Gate, and the beehive Tholos tombs, for the production of high-quality materials such as decorative ivories and painted pottery, and as the home of the legendary king Agamemnon.

Mycenae occupies a limestone hill, flanked by ravines and low mountains to north and south, situated at the north-east edge of the Peloponnesian plain of Argos. It is uniquely situated to dominate all the area it oversees and exploit upland pastures, lowland fields, and routes to and from the shore approximately eight miles to the south. Mycenae is most commonly recognized as the home of legendary king Agamemnon, leader of the Greek contingent in the equally legendary Trojan War. The site is best known for the Middle and Late Bronze Age occupation, especially the fortified citadel on its acropolis, but was inhabited for several thousand years before that time, in a constant and steady state of development, and for at least a millennium after its height in the 14th and 13th centuries bce, remained occupied in a limited way. It gave its name to the distinctive Late Bronze Age of Greece, which is known as the Mycenaean Period.

The Archaeological Society of Athens began archaeological work at the site in 1841 and continues into the 21st century to hold the excavation concession. The first major excavation was started by Heinrich Schliemann, without permission in 1874, following his work at Troy, excavating deep shafts all over the acropolis. With permission, and under the supervision of Society member Panaiotis Stamatakis, beginning in August of 1876, Schliemann fully excavated the area inside the Lion Gate, including and most importantly an enclosed cemetery of deep and extremely rich shaft graves, Grave Circle A. Arguably the burial precinct of the first rulers (16th century bce), it had been reworked and monumentalized with a circular stone enclosure wall during the height of the acropolis/fortification expansion (in the 13th century bce). Excavation was continued, notably by Christos Tsountas, A. J. B. Wace, and Lord William Taylour (the British School at Athens), George Mylonas, and Spyros Iakovides. The Archaeological Society continues excavation in settlement areas to the southwest (Chavos) and northwest (Petsas House) of the citadel. Interpretive work is ongoing and extensive, as part of the publications of the Mylonas-Iakovidis excavations and along new avenues of research including ceramic, skeletal, and biological/organic residues.

The earliest phases of occupation, the Neolithic and Early Helladic periods, are known through sherd evidence on the lower slopes of the hill. A few Early Helladic vases indicate possible cemetery activity on the lower west slope, in the area of the later “Prehistoric Cemetery,” containing mainly children’s graves, and abundant sherds near the hill summit suggest a possible major structure there. Middle Helladic material is copious and widespread on the site, mostly sherds and some burials. In addition, architectural remains exist in deep levels on the acropolis, especially within later terraces, and two have been partially excavated on the west and east slopes, the former for grain storage. All sub-phases of the period are represented in increasing amounts up to the Late and Final phases, when wealth and differentiation are expressed through conspicuous consumption in burial contexts. The increasingly rich and elaborate burials in the shaft graves of Grave Circle B, on a knoll to the west, and Grave Circle A, in the middle of the southwest slope, reflect its rise to power at the beginning of the Late Bronze Age. The architecturally more sophisticated graves contain multiple burials, showing a stronger emphasis on intergenerational connections, while the marked increase in the number, variety, and quality of grave goods, many of them imports from Crete, the Cyclades, and beyond, exhibits the growing importance of wealth and status among the ever more hierarchical society. Production quality, access to materials, and techniques of manufacture in metal, ceramic, and other crafts greatly increase throughout the period and continue steadily into the Late Helladic period, when Mycenae became one of the most important sites in the Argolid. 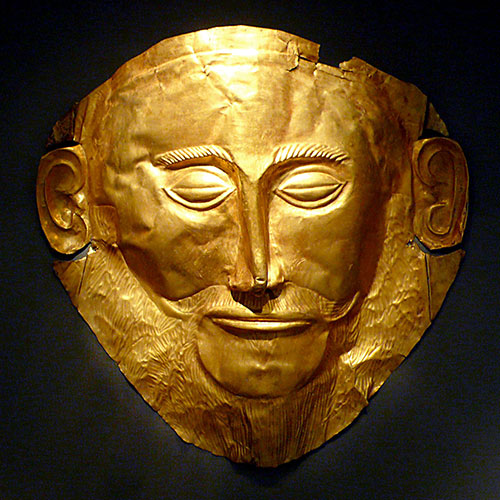 Figure 2. The so-called Mask of Agamemnon, Grave Circle A.

Early in the Late Bronze Age, the ruling elite adopted the monumental round/domed structure, the tholos tomb, for their burials; six tholoi arranged in three groups date from 1550 to 1450 bce. The number and quality of tholos tombs constructed similarly reflect the maintenance of this position of power, while only scanty traces of contemporary buildings have been found. Fresco fragments and sherd evidence suggest the existence of an important building beneath the later palace on the summit of the acropolis. The populace was buried in groups of rock-cut chamber tombs (over two hundred documented) into the slopes of the surrounding hills.

Major building of the 14th to 13th centuries consisted of the palace, the last three tholos tombs (again in the three groups: these include the finest examples, the so-called “Treasury of Atreus” and “Tomb of Clytaemnestra”), and a massive “Cyclopean” citadel wall constructed in three phases (the second including the famous Lion Gate). The palace was built and rebuilt during a long and prosperous phase with ever-increasing signs of centralized control, such as a large workforce and organized building programs—used alternatively for citadel structures and fortification, on the one hand, and burial monuments and regional infrastructure, on the other. The discovery of a small number of clay tablets inscribed in the Linear B script (e.g., Mycenaean greek) shows that the bureaucratic administration known from Knossos and Pylos was in force here. Some of the oldest fragments of Linear B tablets from the Greek mainland, dating to the 14th century, were recently excavated in the “Petsas House” area located in the settlement northwest of the citadel. During this same period, the Cult Center on the southwest slope of the citadel was initiated and expanded, during the 13th century, to multiple distinct shrines with ancillary structures and ramped and gated access; important cult paraphernalia were recovered, including altars for libation and large votive figures. 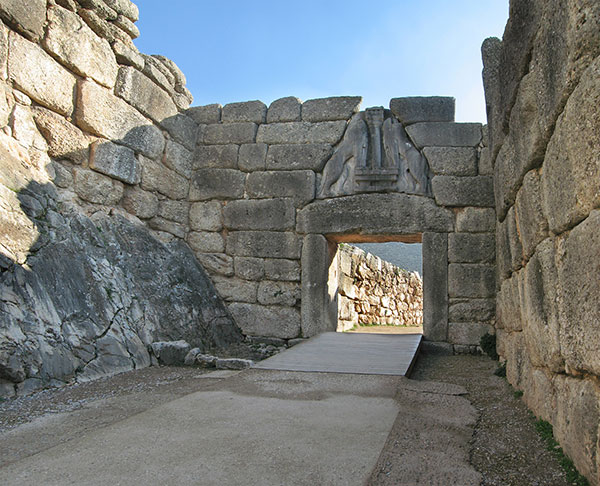 Figure 4. The Lion Gate at Mycenae.

In the 13th century, extensive areas of “houses” (residences, craft workshops, and storage facilities), such as the “Ivory Houses” group, were constructed inside the citadel and outside, in an extensive settlement spreading up to the Panagia ridge to the west and up to the lower slopes of the Profitis Ilias mountain to the north. Mycenae was now at the height of its wealth and power, probably controlling a considerable territory and able to participate widely in Aegean and Mediterranean trade. Much imported material of very high quality was acquired, and there was increasing local craft production of imported raw materials (stone, metal, ivory, and glass). Excellent pottery was locally produced, in massive amounts, much of it for trade, especially to contain and distribute products of palatial interest—oil and wine.

The 13th century bce is marked by several widespread but localized destructions marked by fire, probably related to seismic events (c. 1230 bce), followed by rebuilding on a massive scale. The final extension of the fortifications, to include a stepped passage cut through the rock to an underground cistern beyond the north wall and that was fed by an aqueduct from a nearby spring, looks more like a precaution taken against siege. The period ends (c. 1190 bce) with another destruction accompanied by fire, especially within the citadel, from which recovery was much more difficult, and although there is some indication of continuing centralized control, there is no longer any evidence for the remarkable administration recorded in Linear B script, so the palace-organized bureaucratic economy seems to have ceased. Little of the debris was cleared, but there was reoccupation on some scale within the citadel, parts of which continued to be inhabited until at least 1050 bce. Post-palatial phases show some level of prosperity, especially in pottery, but architecture is less well preserved. There was possibly a late central structure over the ruined palace court. Tomb evidence suggests a great decrease in population that worsened over the length of the period.

Mycenae is one of at least four fortified citadels in the Argive plain and is generally considered to have been the most important center. Archaeological evidence—the contents of the shaft graves, the number of tholos tombs, the level of craft production, the presence of stone sculpture, and its central place in networks both of trade and of roads and bridges—confirms that the site is atypical in wealth and influence. The relation of Mycenae to the other citadels is not clear, however; and the site hierarchy of the region and of Late Bronze Age Greece as a whole is complex.

Isolated pockets of habitation and burial continued through the end of the Bronze Age and into the Iron Age and beyond, with sporadic occupation attested at Mycenae during the Protogeometric and Geometric Periods; in the Archaic Period, a structure decorated with fine relief sculptures was built on the summit (possibly an altar of unknown dedication), and there is considerable evidence of other cult activity, mostly outside the acropolis. During the Persian invasion of Greece (480–479 bce), the town sent a contingent to fight at Thermopylae and at Plataea; some ten years later (ca. 468 bce), it was captured by Argos, who disabled the fortifications. Mycenae was built up and occupied as a kōmē (veteran’s community) of Argos in the Hellenistic period. Mycenae was identified through legend and Homer (Iliad II 569–580) at least until Roman times. Pausanias (II.15), the 2nd century ce Roman traveler, visited the site and described its mythical origins and some of the visible remains; the massive fortification walls and the Lion Gate were visible through most of antiquity.