Symeon the Stylite the Younger (521–592 ce), a pillar-saint or “stylite,” practised his mode of Christian asceticism for more than sixty years on a mountain southwest of Antioch. Symeon’s lifetime, spanning most of the 6th century, coincides with a drastic time of transition in the history of Antioch, which began with the devastating earthquake of 526 ce and includes events such as the sack of Antioch in 540 ce and the Plague of Justinian in the following years. Symeon also happens to be one of the best-documented holy men from this period. The remains of his monastery have been preserved and studied extensively. A number of pilgrimage objects, most notably clay tokens, have also received much scholarly attention. The extant literary evidence is also vast, though understudied in comparison. It includes homilies, letters, and short hymns penned by the saint himself, as well as two hagiographies composed by members of his monastic community shortly after his death. Symeon, therefore, is a critical figure for understanding many issues relevant to the study of the Eastern Roman Empire during this period: political, social, and theological history; the development of cult sites and pilgrimage; the literary self-representation of a stylite and his community; and the construction of monumental architecture and water management in remote locations in Syria, among many others.

Symeon was born in Antioch to his mother Martha from Antioch and his father John from Edessa in 521 ce. He died in his monastery upon the Wondrous Mountain, located approximately 18 kilometres (11 miles) southwest of Antioch, in 592 ce. Symeon spent his early years in Antioch until the earthquake of 526 ce. He then entered the monastery of the stylite John located at the base of the Wondrous Mountain at the age of 5 or 6. At the age of 7, he took up standing on a small pedestal next to John’s stylite column and excelled in ascetic renunciation and fasting. At the age of 12 or 13, he ascended a column 12 metres (40 feet) in height. At this time, the bishops of Antioch and Seleucia Pieria also anointed him a deacon. Soon after, the abbot John died, and Symeon assumed leadership for the monastery. At the age of 20 (541 ce), Symeon processed from the base of the Wondrous Mountain to the summit, where he founded a new monastery, of which the lower monastery would be a subsidiary. While Symeon inhabited some form of an enclosure, monks and pilgrims constructed the monastery on the Wondrous Mountain. By the early 7th century, the complex included a column placed centrally within an octagon (see Figure 1), three churches, living quarters for monks, a hospice, and a baptistery among other facilities. On June 4, 551 ce, at the age of 30, Symeon along with his mother dedicated the completed portions of the monastery. Three years later, he was ordained a priest by Dionysius, the bishop of Seleucia Pieria. Symeon received pilgrims from Antioch, its suburbs, and its hinterlands, as well as Cilicia, Isauria, Syria, Cappadocia, Armenia, and Iberia. He was famed for healing and offering relief in times of natural disaster. On his death, his remains were interred at his cult site, as were the remains of his mother. His feast day is celebrated on May 24, the same day as his death.

Figure 1. The column of Symeon the Younger upon the Wondrous Mountain, view from the west looking east.

The Writings of Symeon the Younger

Symeon’s extant writings, all in Greek, provide the earliest literary evidence for his career and the history of his monastic community, though they have received the least scholarly attention to date. They consist of thirty homilies purportedly delivered between the years 531–545 ce, three or four troparia (short hymns of a single stanza), and at least one letter. The homilies, which emphasize monastic, secular, and eschatological themes, are preserved separately from the hagiographical material and may have been heavily redacted following their collection. This hypothesis is based on the stylistic differences between these homilies and the corresponding discourses embedded in the Life of Symeon, but the state of the question is currently unclear. Three extant troparia are quoted verbatim in the Life of Symeon. According to the hagiographer, they were composed in response to a series of earthquakes in November–December of 557 ce. A fourth hymn is found in the manuscript tradition (see Magdalen MS gr. 9, 288r), but it is also an excerpt from the Life, though one that circulated independently. One letter is preserved in the Acts of the Second Council of Nicaea (787 ce), where it was cited in defence of the veneration of icons. In this letter, the saint petitioned Justin II (or possibly Justinian) to intervene when an image of Christ and the Theotokos was desecrated in the city of Porphyreon. Additionally, the Life of Symeon describes six exchanges of letters, five between Symeon and various Constantinopolitan dignitaries, including Justin II, John Scholasticus, and Theodore the Praetorian Prefect, and the sixth with Evagrius Scholasticus, who also mentions this exchange in his Ecclesiastical History. Finally, the Life of Martha includes an embedded verbatim letter exchange between Symeon and Thomas the Staurophylax (Guardian of the Cross) in Jerusalem, but the authenticity of the letter attributed to Symeon has not been determined.

The archaeological record preserves the second-oldest set of evidence for Symeon’s life and cult. Remains of Symeon’s monastery are preserved on the Wondrous Mountain (modern Turkish Semandağ). The site was adjacent to the Roman road connecting Antioch and Seleucia Pieria. In the most recent archaeological assessment of the complex, Ayşe Belgin-Henry distinguished four phases of construction on the Wondrous Mountain and established an updated site plan (see Figure 2).1 The first phase predates the pilgrimage complex. The structures from this phase indicate that the site was occupied prior to the 6th century, but its function is unclear. The second phase of construction took place between 541 and 551 ce and consisted of the construction of the octagon with the column and monolithic staircase, the Church of the Holy Trinity, and probably the hospice, all set down in the Life of Symeon. It also included the construction of the North Church, the atrium, the entrance hall, and probably the baptistery, structures not discussed in the Life. The third phase took place after Martha’s death c. 562 ce. It consisted of the construction of the South Church (dedicated to Martha) as well as the construction or substantial renovation of the south passage into the octagon, the storage area, and the tetraconch on the southwest side of the octagon. The fourth phase comprises post-6th-century renovations and repairs, many of which occurred after the Byzantine reoccupation of Antioch in 969 ce. The monastery continued to be used into the 13th century, housing a vibrant population of Greek-, Georgian-, Arabic-, and potentially Syriac-speaking monks. 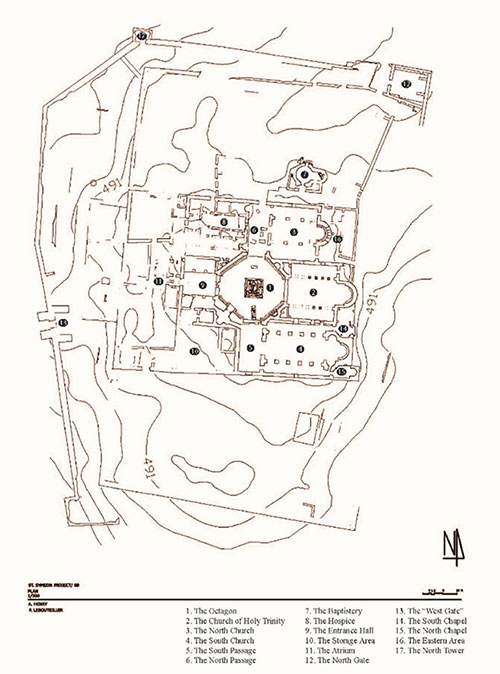 In addition, a number of pilgrimage tokens depict stylites, but only those which identify the younger stylite with an inscription can be securely associated with the saint (see Figure 3). In total, nine tokens and related objects can be securely identified as representing Symeon the Younger and dated to late antiquity: four clay tokens housed in the monastic church at Bobbio, Italy; two clay tokens in the Menil Collection in Houston, Texas (nos. 1979-24.198 DJ and 1979-24.200 DJ); two lead or clay tokens in the Hatay Archaeological Museum in Antakya, Turkey (nos. 8655 and 8749 according to Lafontaine-Dosogne); and a bifaced marble stamp for tokens from el-Fauz, Syria. In addition, several lead medallions dating from the Byzantine reconquest of Syria (969–1074 ce) display Symeon the Younger. 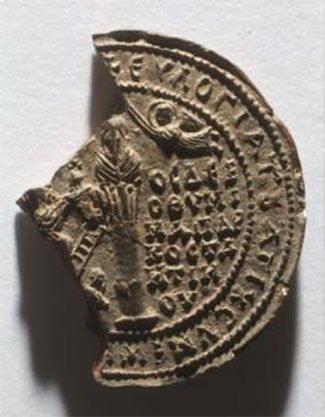 Courtesy of the Menil Collection.

The Life of Symeon (Bibliotheca Hagiographica Graeca [BHG] 1689), composed in Greek, is among the longest hagiographies in late antiquity, eclipsing even large anthologies such as Theodoret’s Religious History and John Moschus’s Spiritual Meadow. It was composed sometime after Symeon’s death in 592 ce by an anonymous member of the saint’s monastic community who claims to have personally witnessed many of the events described. The author probably worked from multiple written sources housed at the monastery. Scholars such as Hippolyte Delehaye and Paul van den Ven have generally accepted the view that the vita was composed shortly after Symeon’s death, proposing the early 7th century, and Vincent Déroche narrowed this window slightly, suggesting the reign of Phocas (602–10) on the basis of internal evidence.2

The Life of Symeon represents a hybrid of hagiographical genres, combining biography proper with elements usually associated with miracle collections. In general, the sections narrating Symeon’s life progress chronologically from birth until death and give structure to the text, though certain periods are emphasized over others. Symeon’s activity during the construction of the monastic complex from 541 to 551 ce, for example, is treated in great detail, while his later life is significantly less well documented. Nested throughout the narrative sections are dozens of miracles, often clustered together, which include bilocation, prophetic visions, communication with wild animals, and numerous healings of monks, pilgrims, and distant suppliants. No posthumous miracles are recorded. Many of these miracles are closely related to and serve to expand upon their narrative context, while other groups appear disconnected and interchangeable, even repetitive. The literary framework of this text merits further investigation; such analysis will advance our understanding of the composition, the performance, and the reception of the Life of Symeon. Additionally, because of Symeon’s wide influence, the text provides a wealth of political and social history for Antioch and the surrounding area, including descriptions of the earthquakes in Antioch in 526 and 557 ce, the Sasanian invasion in 540 ce, and incidents of plague in Antioch starting in 542 ce. Thus, the text offers valuable evidence for the question of Antioch’s decline, continuity, or resilience in the 6th century. The Life of Symeon enjoyed a rich afterlife and a wide readership. Translations into Syriac, Arabic, and Georgian are attested, as well as multiple Greek metaphraseis, all from the 8th century onward.

The Life of Martha (Bibliotheca Hagiographica Graeca [BHG] 1174), written anonymously and traditionally dated to the years following the completion of the Life of Symeon, is a sequel of sorts to this text. If the reign of Phocas is indeed when the Life of Symeon was composed, 610 ce becomes a plausible terminus post quem for the composition of the Life of Martha. The terminus ante quem is more difficult to establish, but it was probably completed prior to the Islamic conquest of Antioch in 638 ce. Like its earlier counterpart, the structure of the Life of Martha is atypical. Although it is called a “Life,” details about Martha’s birth, childhood, and even much of her adult life are notably absent. Instead the narrative begins mere weeks before its protagonist’s death. The second part of the vita focuses on Martha’s posthumous miracles and directions for the construction of a new church at the cult site. The third and final part addresses the transfer of Martha’s body from its temporary location near Symeon’s column to the newly constructed church, as well as the translation of a piece of the True Cross from Jerusalem to the monastery. Unlike the Life of Symeon, the Life of Martha has a focused literary argument: to connect Martha with the Cross and therefore the acquisition of the relic from Jerusalem with the church constructed to commemorate her. Because of this fact, it is reasonable to read the Life of Martha as a conscious act of monastic self-representation in response to the theft of the True Cross from Jerusalem by Khosrow II in 614 ce. Additionally, the Life of Martha is noteworthy for including some important details attested nowhere else in the tradition. These include the location of Symeon’s body after his death and the only description of someone using a pilgrimage token from the Wondrous Mountain. The Life of Martha was also translated into Georgian some years after the Life of Symeon.

Life of Symeon the Stylite the Younger