The origins of the oracle of Apollo date to the very end of the 9th century bce. Eventually it developed into the most important Greek oracle and was consulted by poleis (see polis) as well as individuals. It played an important guiding role in the formation of the Greek poleis and in colonization; it gave guidance on warfare, pollution, “release from evils,” (rarely) laws, and—above all—cult. The story that Apollo was not the original owner of the oracle but replaced an earlier deity (different versions naming different deities, but all including Gaia or Themis, or both) is unlikely to reflect cult history; it is a myth, expressing the perception that at Delphi the chthonian, dangerous, and disorderly aspects of the cosmos have been defeated by, and subordinated to, the celestial guide and lawgiver.1 Apollo’s oracle has tamed the darker side of the cosmos—both at the theological (Gaia’s defeat) and at the human level: it therefore gives men divine guidance through which they can cope with this side of the cosmos.

The earliest temple for which there is evidence belongs to the second half of the 7th century or early 6th century bce (at which time the sacred area of the Apollo sanctuary was also officially separated out from the settlement around it). The temple whose remains are visible was built in the 4th century (fig. 1). 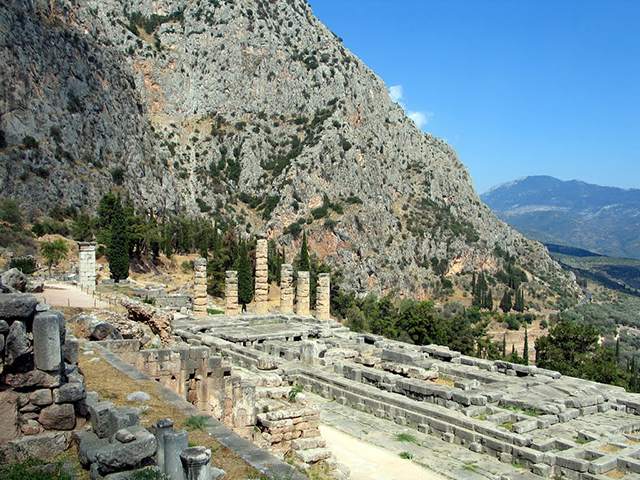 Its predecessor was built in the last quarter of the 6th century, after the earlier temple had been burnt down in 548/547. The full oracular consultation, available regularly on only nine or perhaps twelve days each year, took place in the adyton (innermost sanctuary), in which stood the omphalos marking the centre of the world as determined by Zeus, who released two eagles, one from the east and one from the west, which met at Delphi (cf. Pindar fr. 54). Another story makes the omphalos Python’s or Dionysus’s tomb. The adyton also included a living laurel tree and, according to an ancient tradition which recent geological discoveries may support, a chasm emitting vapours.2 The enquirer had to pay a consultation tax called pelanos (which had begun as a bloodless offering—the word means “cake”—and kept the name when it became a monetary contribution).

At the altar outside the temple was offered the preliminary sacrifice before the consultation, the prothysis, which was offered either by the Delphic polis on behalf of all enquirers, or sometimes by the enquirer—to be more precise, on behalf of the enquirer by the proxenos of his city, who necessarily introduced him to the sanctuary: non-Delphians were treated at the Delphic oracle as xenoi, foreigners, worshipping at the sanctuary of another polis. If the preliminary ritual was successful, that is, if the animal had reacted as it should when sprinkled with water (cf. Plut. Mor. 437a, 438a–b), it was sacrificed, and the enquirer entered the temple, where he offered a second sacrifice, depositing either a whole victim or parts of one on a trapeza (offering table) at the entrance of the adyton. He then probably went with the prophētai (interpreters) and other cult personnel to a space from which he could not see the Pythia in the adyton. The Pythia, who had prepared herself by purification at the Castalian Spring, burnt laurel leaves and barley meal on the altar called hestia inside the temple (which came to be seen as the common hearth of Greece); crowned with laurel, she sat on the tripod, became possessed by the god, and, shaking a laurel, prophesied under divine inspiration—a state which may correspond to what could be considered a self-induced trance. Her pronouncements were then somehow shaped by the prophētai. Exactly what form the Pythia’s pronouncements took and what the prophētai did are matters of controversy. One possibility is that she felt that she received partial signs transmitting fragmentary visions—not gibberish—and that the prophētai interpreted these, shaping them into coherent, if ambiguous, responses; this was not an attempt to hedge their bets, but a result of the ambiguity inherent in the god’s signs and the Greek perception that ambiguity is the idiom of prophecy, that there are limits to humans’ access to knowledge about the future: the god speaks ambiguously, and human fallibility intervenes and may misinterpret the messages.

The most important of the oracle’s religious personnel (consisting of Delphians) were the Pythia, an ordinary woman who served for life and remained chaste throughout her service; the prophētai; the hosioi, who participated in the ritual of the consultation and shared tasks with the prophētai; and the priests of Apollo. The Pythia is not mentioned in the oldest “document” informing us about the Delphic cult and oracle, the Homeric hymn to Apollo, where the god gives oracular responses “from the laurel-tree” (393–396), an expression that corresponds closely to that (“from the oak-tree”) used in the Odyssey (14. 327–328; 19. 296–297) for the prophecies at Dodona, where the oak-tree spoke the will of Zeus, which was interpreted by priests. A similar practice involving the laurel may perhaps have been practised at Delphi at an early period. Whether divination by lot was practised at Delphi as a separate rite is a matter of controversy (with some evidence for it being found at the Corycian cave on the plateau up above Delphi).

Control of the oracle was—from the 6th century bce—in the hands of the Delphic amphictiony, run by the amphictionic council, whose duties included the conduct of the pan-Hellenic Pythian Games (started in the early 6th century), the care of the finances of the sanctuary, and the upkeep of the temple. The amphictiony supposedly fought a war against Crisa and defeated it; this is the First Sacred War, the historicity of which has been doubted, but the traditional date for its end (c. 590 bce) coincides with the beginning of a period of transformation, a serious upgrading of the sanctuary, not the least of its manifestations being the building of several treasuries. The first Pythian Games were held to celebrate the amphictiony’s victory. Other Sacred Wars took place subsequently, of which the fourth ended in 338 with the victory of Philip (1) II of Macedon at the battle of Chaeronea. The oracle’s influence continued through into the Hellenistic and Roman periods particularly on matters of cult practice, but its “political” and military role inevitably diminished in the radically changed circumstances of the Hellenistic and Graeco-Roman world. However, the continued survival and importance of the sanctuary was guaranteed not only by its impressive list of previous oracular consulters (which many were keen to copy in their turn) but also by the ongoing popularity of the Pythian games, as well as, crucially, the vibrant business of monument dedication (often associated with a successful consultation with the oracle) within the sanctuary which created a permanent visible historical record into which newcomers could also in their turn insert themselves with their own dedications (fig. 2).

Figure 2. View of the Delphic sanctuary from the theatre.

Thus Delphi became in the early first centuries ce a place of intense display as much as it was one of divine consultation, as much a tourist attraction as a place for philosophical thought. In turn, this variety of attractions enabled Delphi to survive into the Early Middle Ages: the final recorded consultation of the oracle is by the Emperor Julian (361–363 ce), but the sanctuary itself continued “in business” for several centuries, only finally being abandoned in the early 7th century.