Gardens in the Greek and Roman world were both important cultural spaces and essential contributors to the Mediterranean food economy. Originally dedicated to producing useful household plants for the farm, the garden (kēpos, hortus) developed into a highly desirable urban and suburban amenity that combined productive, leisure, and religious space. Gardens’ association with the paradeisos enclosures of Persian and Hellenistic kings also encouraged their use as status symbols that signaled wealth and power. Gardens were also used as spaces of philosophical engagement and religious activity. They serve as an index of colonial and imperialist practice, reflecting the expansion of Greek and Roman territory through the introduction of new plants, and the use of Hellenizing and Orientalizing art and architecture. As cultivated places defined by their proximity to architecture, gardens emerged as an ideal space to explore the intersection between art and nature represented in the idea of the locus amoenus (‘pleasant place’) and the culture of the Roman villa. Advances in archaeological techniques continue to discover evidence for ancient gardens throughout the classical world, with the best-preserved examples found at Pompeii and Herculaneum.

Social and Cultural Role of Gardens in the Ancient Mediterranean

Although gardens are present throughout the ancient Mediterranean, the most comprehensive evidence is drawn from Roman Italy during the late republic and early empire (c. 70 bce–100 ce). Early gardens are not easily distinguished from other types of managed landscape—orchards, groves, and vegetable plots—which makes their development and distribution largely a matter of conjecture. However, from the mid-4th century bce exposure to the established garden cultures of Persia and Egypt combined with increased social mobility and architectural innovation to develop the portico or peristyle garden. 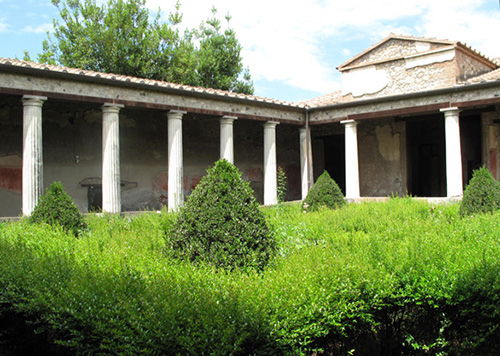 The introduction of a colonnade, originally a feature of the public palaestra or gymnasium, into the garden area signalled its increasing use as a leisure space.1 The introduction of the portico shifted the emphasis of the domestic garden towards aesthetics and walkability over productivity (Vitr. De arch. 5.9.1–5). Popularized by Epicurus (Diog. Laert. 10.10; Pliny, HN 19.50–51) and Theophrastus, (Diog. Laert. 5.52), the peristyle garden was associated with Greek philosophy, culture, and connoisseurship (see philhellenism).2 It was, therefore, considered an appropriate space for displaying paintings and sculpture (Cic. Fam. 7.23) (see art, ancient attitudes to). The result is an archaeologically recognizable garden type consisting of a mix of ornamental and utilitarian planting, colonnade, and water feature (fountain or pool). Although not every garden was a peristyle garden, its scalability and flexibility allowed it to be used in a wide variety of contexts from modest Pompeiian houses, where the architectural features are present as wall paintings and the plantings confined to pots, to Hadrian’s Villa at Tibur, where the landscaped grounds comprise a series of vast colonnaded water features and pavilions.

During the late republic there was intense competition among the Roman elite to acquire and develop urban and suburban horti (large garden estates attached to an urban villa). These were valued not only for their commercial productivity and aesthetic appeal but because they advertised their owner’s wealth and status through a medium that also conveyed moral virtue and fitness for government (Cato, Ag. pref. 2; Pliny, HN 18.19–20). With the inauguration of the Principate, most of these sites came into imperial ownership and eventually many were converted into public parks.3 This association of gardens with Roman imperial power and Romanization account for their provincial presence, including important examples in the villa of Claudius Togidubnus in Britain, the palaces of Herod the Great at Jericho and Caesarea Maritima, and the palace complex at Petra (see Romanization).4 The letters of Sidonius Apollinaris suggest that gardens continued to be an important feature of elite villa culture well into the 5th century ce (Ep. 2.2).

The archaeological visibility of peristyle gardens and the historical associations of Rome’s horti tend to overshadow the fact that the majority of gardens in the ancient Mediterranean were small, often marginal plots characterized more by the concentration of labour and resources than by any specific plants or structures.5 The common features were irrigation, some kind of boundary, and intensive intercultivation. While the content of individual gardens depended on regional variation and personal preference, the literary, visual, and archaeological evidence shows that gardens were generally expected to grow a mix of herbs (culinary and medicinal), vegetables (usually cabbages, leeks, onions, and lettuce), fruit trees, vines, and flowers (usually roses and violets). These small gardens were not only a vital food source, especially for poor families (Columella, Rust. 10. pref. 1–3; Pliny, HN 19.52), but they allowed their owners to participate in the local economy through the sale of fresh or preserved produce, medical supplies, garlands, and honey.6 The garden was, therefore, considered the most important feature of a profitable farm after a vineyard, and buyers were advised to give them high priority when looking for a property (Cato, Ag. 1.7) 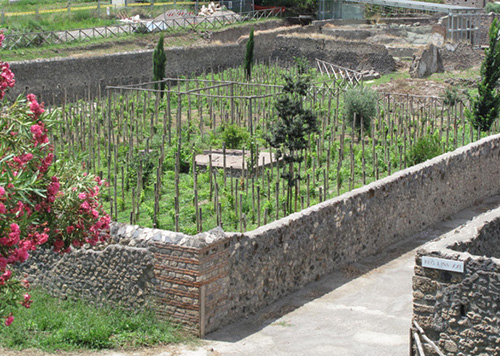 In addition to their role in the agricultural economy, gardens also provided employment. The elite interest in horti raised the value of land and encouraged specialization of labour in the form of a topiarius, who specialized in creating an arrangement of walks, views, and plantings to pleasing effect (Cic. QFr. 3.1.5). The development of botanical and specimen gardens required specialist nurseries and encouraged the development of new varietals through selective breeding and hybridization. The role of nurseries as part of the garden economy is identified through the widespread presence of plant pots (ollae perforatae) used by nurseries to raise and transport their stock, both locally and between provinces. The international trade in plants encouraged increasing biodiversity and reflected the interconnectivity of colonies and territories. Agricultural handbooks (see agricultural writers) spanning five centuries provide evidence for the introduction of new species and cultivars and broadly document a process of environmental and ecological change.8

Gardens were also used as spaces of religious activity, with altars a common feature in the gardens of Pompeii and Herculaneum. Originally taking the form of a sacred grove (alsos, nemus, lucus) attached to a temple or a particularly venerated tree (Pliny, HN 19.49–50), these semi-wild spaces could only be sustained in urban contexts as planned green space, as demonstrated by the rock-cut planting pits and water channels from the Hephaisteion in Athens.9 The worship of Adonis was celebrated by growing short-lived container gardens. While sacred gardens belonged to their god, individual gardens were under the protection of Priapus, and in general they were associated with Venus and Aphrodite. Etruscan wall paintings and Greek and Latin inscriptions point to a long tradition of tomb gardens (cepotaphia), intended for funeral feasts and annual commemorations. This use may have emerged through the garden’s conceptual links to the mythic space of Elysium and the Hesperides, both associated with death and the afterlife.

Gardens in Literature and Art

Gardens are present in all genres of Greek and Roman literature in a time span that ranges from Homer’s Odyssey to Michael Psellus’s history of Constantine IX (c. 600 bce–1081 ce). Horticulture is referenced in most works by agricultural writers as part of effective farm management, with Columella and Palladius (1) providing the most detailed accounts (a dedicated treatise by Gargilius Martialis is lost). However, the descriptions that have had most influence on Greek and Latin literature are of the garden of Alcinous (Hom. Od. 7.112–131), the garden of the old Corycian (Vir. G. 4.129–146), and letters of Pliny (2) the Younger describing his Laurentine and Tuscan villas (Pliny, Ep. 2.17 and 5.6).10 These sources contributed to the formation of the literary trope of the locus amoenus (pleasant place) characterized by anthropocentrically pleasing arrangements of trees, grass, flowers, and running water. However, positioning the garden at the intersection of art and nature walked a fine line between aesthetic delight and hubristic luxury. Where Horace might delight in his Sabine villa (Hor. Sat. 2.6) and Statius praise the Epicurean sensibility of his patron’s (Stat. Silv. 2.2), Seneca could use them as evidence of moral decay (Sen. Ep. 55.4).11 Ostensibly characterized by leisure (otium), gardens could also serve as places of transgression (especially sexual or gender-based) and danger, as demonstrated by Tacitus’s use of gardens to frame the downfall of Messalina (Tac. Ann. 11.1–37).12 The sensuous nature of gardens also made them ideal spaces for erotic encounter (Longus 2.7). With the advent of Christianity as an officially recognized religion, the gardened locus amoenus was represented as a heavenly, paradisiacal place (Prud. Cath. 5.113–128) and the erotic aspect of gardened space transferred to the more carefully guarded ideal of women’s sexuality as a hortus conclusus (enclosed garden) (see chastity, Christian). 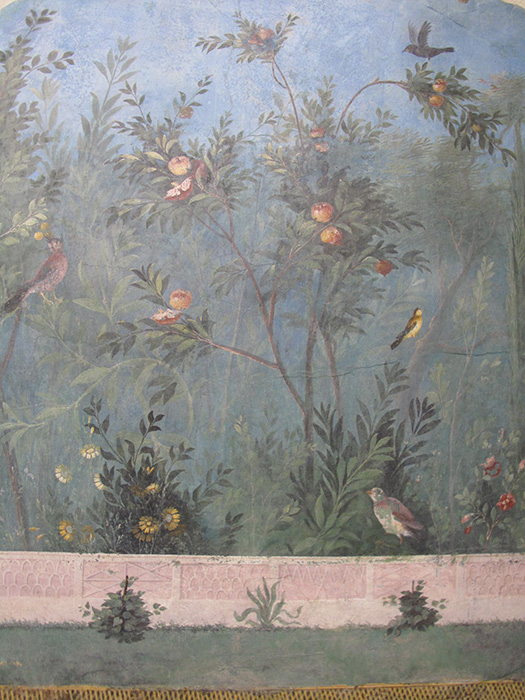 These consistently depict arrangements of trees and flowers bordered by paths and low fences, with fountains and displays of statuary or painted panels (pinakes). Birds and mythological figures can also be part of the scene; Dionysiac elements were especially popular—satyrs, maenads, dramatic masks—as were exotic Nilotic elements. Garden sculpture favoured representations of Venus, Apollo, and Dionysus, philosophers, satyrs, muses, hermaphrodites, children, and animals. Curiously, few images of Priapus have been recovered, but this may be because they were traditionally made of wood.14 The plants depicted generally correspond to those mentioned by agricultural writers—the emphasis is on herbs and fruit rather than vegetables—with the addition of shade trees such as oak, laurel, cypress, and plane and ornamental ground plants such as ivy, fern, acanthus, and boxwood.

Byzantine and early Islamic garden culture maintained and developed many Classical garden features, especially the emphasis on running water.15 Medieval gardens built on the tradition of the hortus conclusus to create both monastic gardens and dedicated female space (famously described in Le Roman de la rose). With the emergence of the Renaissance, the influence of Pliny’s letters encouraged the development of large-scale formal gardens to showcase collections of antique sculpture (one of the best examples can be found at the Villa d’Este, built with discoveries from Hadrian’s Villa).16 In the 18th and 19th centuries, antiquarian interest in gardens was mainly expressed by academician painters such as Lawrence Alma-Tadema. Recreations of Roman houses such as the Pompeijanum at Aschaffenburg made an attempt to incorporate elements of the garden into their structure. Today the finest and fullest examples can be found at the J. Paul Getty Villa in Malibu in California, a recreation of the Villa of the Papyri from Herculaneum that features four large-scale gardens with water features and classical statuary, including a produce garden.17 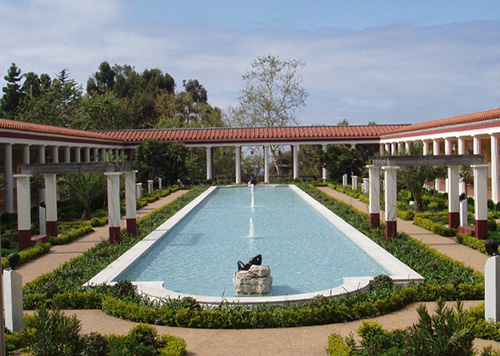 More recently, the artist Ian Hamilton Finlay revisited the tensions of the classical locus amoenus in his garden at Little Sparta, near Edinburgh.18