Updated on 26 October 2017. The previous version of this content can be found here.

This major figure in the pantheon, daughter of Cronus and wife of Zeus, is already attested to by name on two Mycenaean tablets, one from Thebes (1) (TH Of 28) and the other from Pylos (PY Tn 316), where she appears together with Zeus. In continental Greece, the Peloponnesus is the region where the cult of Hera was most prevalent. According to Homer (Il. 4.51–52), Hera’s favourite cities were Argos (1), Sparta, and Mycenae; several cults are actually reported in Sparta, but her most famous sanctuary was on the hill dominating the Argive plain, where there was apparently a temple from as early as the 8th century bce. Sanctuaries with archaic buildings were present at Perachora, Tiryns (on the site of the megaron of the Mycenaean palace), and Olympia. Regarding island sites, Hera had a small temple on Delos from the 7th century bce, although the best known is the sanctuary on Samos, where the main building (rebuilt in the 6th century bce) was mentioned by Herodotus, who commented on its magnificence (3.60). Thus the most ancient and important temples in Greece were apparently those of Hera.

From her first appearances in epic poetry, Hera’s distinguishing feature in comparison with other goddesses is her double connection with royalty and marriage. In this way she is closely associated with Zeus, who made her “last of all, his flourishing wife” (Hes. Theog. 921). Across the whole Greek narrative tradition Hera remains the wife of the king of the gods (who shares his bed) and the queen (who shares his throne). In her cults, two titles are recurrent and virtually unique to Hera: Teleia (literally “the Accomplished one” or “the Spouse”) and Basileia (“the Queen”), in parallel to Zeus, who is Teleios as well as Basileus, among many other cult-titles (Figure 1). 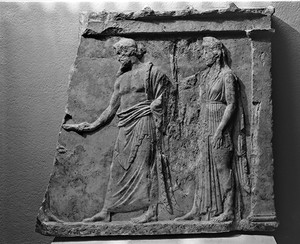 Figure 1. Attic votive relief dated to the 4th century bce and representing two deities on the right, in front of votaries now missing on the broken-off part of the stone (except foot and hand). Although the relief is not inscribed, the gods can be identified as Zeus and Hera with good probability.

Accordingly, cults and myths cohere in their respective depiction of Hera, even if scholarship has for a long time distinguished between two opposing images of Hera: the shrew always getting angry with her husband and persecuting his illegitimate children in tales and narratives or the noble deity honoured in Greek cities such as Argos or Samos. In considering that stories, cults, and even images are specific languages echoing one another, important insights emerge from a close comparison between such rich and varied evidence. In the case of Hera, the main clues for understanding the various aspects of her persona are the notions of marriage, legitimacy, power, and sovereignty. This definitional structure of the goddess is largely rooted in the relationship with her husband and brother, the king of the gods. Therefore, any attempts to reconstruct a “prehistory” of Hera as a “great goddess” independent from Zeus has more to do with modern expectations and fantasy than with ancient evidence. 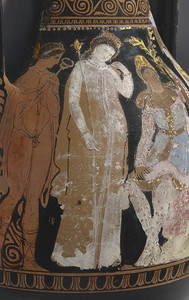 Figure 2. Attic red-figure pelike (Kerch style, c. 360 bce) representing the judgement of Paris. Hera wears a crown on her head and holds a sceptre in her right hand. With the other hand, she lifts her veil on her shoulder, which is the typical gesture of the bride. Hera is the queen and the spouse par excellence.

At Stymphalus, Hera was called simultaneously Pais (“child”), Teleia (“wife”), and Chēra (“separated”) (Paus. 8.22.2–3). In Argos, every year, Hera was thought to restore her virginity (Paus. 2.38.2) and she received sacrifices related to marriage (Hesychius λ‎ 743). The Boeotian city of Plataea celebrated the Daidala, a festival referring to the marriage of Zeus and Hera, their separation and subsequent reconciliation (Paus. 9.3.1–2). All these elements in different cult places refer to a mythic and ritual cycle through which the goddess is depicted in three stages: first, she is born, nurtured, and becomes a maiden; then she marries Zeus, before (for one reason or another) leaving her husband (and the region); finally she returns and becomes a virgin again. The cycle then starts over; the goddess renews her marriage to Zeus as well as her royal position. Even in Samos, where Zeus seems to be absent from Hera’s local story and cult, traces of such a cycle can be perceived in the scattered evidence, and a local poet celebrated the queen of his island as “the young and glorious bride of Zeus” (Nikainetos, ap. Ath. 15.673b). The figure of the spouse, Hera Teleia, is the pivotal element of the cycle, as attested by the fact that marriage is stressed constantly in Hera’s myths and cults, notably in Attica (Figure 2). At the festival of Theogamia, celebrated in Gamelion, local communities honoured Zeus Teleios and Hera in a public sacrifice (LSCG 18; cf. NGSL 1), while at the same time feasts were held in private houses. In Crete, the marriage was said to be re-enacted annually at the river Theren “in imitation of what was transmitted from the origin” (Diod. Sic. 5.72.4). This evidence significantly contributed to the coining of the expression hieros gamos, “sacred marriage,” to designate such festivals, and Near-Eastern comparisons have introduced the idea that the “sacred marriage” of Zeus and Hera was staged in one way or another, which remains highly speculative. Instead, the cycle of Hera and the Attic Theogamia attest to the fact that, in Greek cities, the bride was central in the matrimonial process, not because she would have been in some way more important than her bridegroom, but because of her critical position as a moving element passing from one house to another and her status as a future mother of legitimate children. It is not mere chance that clay models of houses have been discovered predominantly in Hera’s sanctuaries.

But goddesses are not the equivalent of human women, and Hera was more involved in protecting the legitimacy of children than in motherhood as such. In myths, her children are Ares, who inherited her anger applied on the battlefield; Hebe, whose name refers to the fullness of youth; and Eileithyia, protectress of childbirth (Hes. Theog. 921–923). Hephaestus is considered either a son of the divine pair or the son born from Hera alone in anger against Zeus who had given birth to Athena without her. In contrast to Gaia or Rhea, respective wifes of Ouranos and Cronos, Hera does not give birth to a cunning male heir who is supposed to overthrow the power of her husband. In the eternity of the cosmos governed by Zeus, she is not a “mother goddess” at all, but the indispensable partner of the sovereign god, a kind of alter ego who defies him and reigns at his side. Even their disputes are rooted in such partnership and not only in her supposed protection of legitimate union. When the queen of the gods prosecutes Heracles or Dionysus, Hera can be seen as a jealous wife poisoning the lives of her husband’s illegitimate children. But this picture is clearly incomplete. Her main objective is to secure the limits of Olympus, while also letting these heroes accomplish all their potentialities to become legitimate and real Olympian gods. When Hesiod mentions that she acted as nurse to monsters such as the Lernaean Hydra or the Nemean lion (Theog. 313–332), he specifies that in doing so she aimed to prepare some of the labours of Heracles. 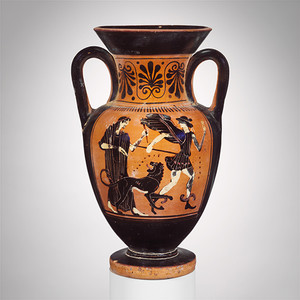 Figure 3. Attic black-figure amphora attributed to the Diosphos Painter (c. 500 bce). Hera sends out Iris with the lion to ravage the region of Nemea. The reverse of the amphora shows a related scene: Heracles wrestling the lion, with Athena next to him.

Digital image courtesy of The Metropolitan Museum of Art, X.21.15.

At the end of his probation, the hero, whose name could mean the “glory of Hera,” becomes a god by entering the Olympian dwellings and marrying Hebe, the eternal Youth, daughter of Zeus and Hera. Even when she creates a powerful opponent to her husband in giving birth to the monster Typhon in response to Athena’s birth (Hom. hymn Apol. 305–355), Hera finally gives Zeus the opportunity to stabilize his power and reaffirm his sovereignty over the cosmos. In the Argonautic expedition, the protection that she gives to Jason (Pind. Pyth. 4) does not make him become a god, but induces him to develop all his potentialities in securing the golden fleece, a talisman of royalty (thanks to his union with Medea), and to recover his throne in Thessalian Iolcos: once more, probation, legitimation, marriage, and sovereignty are closely related to Hera.

In cities where she was the tutelary deity, such as Argos or Samos, Hera granted her protection at various levels and in different domains of society and communal life. In her sanctuary on the Argive plain, her rule extended over the animal herds of the plain. She was also involved in land labour since a local aetiology calls the flourishing cereals “Hera’s flowers” (Etym. Magn. 490.29–45). In the same vein, the cuckoo perched on the sceptre held by the statue made for her by Polycletus (Paus. 2.17.3–4) and also figured in the decoration of her Argive temple was the bird of the hōra, the appropriate time to farm the land in the spring as well as to marry. The Horae, goddesses of the hōra, were represented on the crown of the same statue with the Charites. In the city of Argos, the goddess was called Antheia (Paus. 2.22.1) as a parallel of the extra-urban sanctuary in the town centre. Zeus’s wife exercises royal power, symbolized by the sceptre, over the local community; in this way, she supports “blossoming” and she grants her “favour” (hōra and charis) in various directions: the stability of political institutions, the growing of young people, vegetal and animal flourishing, as well as power and wealth tout court. If, in narratives, she gives her protection to Jason during his travel through the seas, in her cult places Hera was also involved in such enterprises. In her sanctuary of Samos, among many other offerings, she received miniature boats, suggesting a relationship to the sea and seafarers. Other sanctuaries next to the sea attest such patronage: on the island of Thasos, the goddess was honoured as Epilimenia (“on the shore” IG XII. Suppl. 409); in Delos, one of her sanctuaries was in the harbour (IDélos 1446 b.44–46); and she was Limenia (“of the shore”) in Perachora (e.g., SEG 22.241b), which was the sanctuary opening the archaic Corinthian colonial road to the Far West. In South Italy and Sicily, Greek colonists founded important sanctuaries of Hera during the archaic period, for instance on the Lacinian promontory or at the mouth of the river Sele (see croton; paestum).

As with most of the Greek pantheon, Hera’s origins are unclear. There is no certain etymology for her name; if the modern consensus sees Linear B Era as the feminine of hērōs (ἥρως‎), this itself has given rise to differing interpretations. The supporters of an Indo-European origin from the root †yer explain the name variously as meaning “heifer” (van Windekens), “the goddess of the year” (Haudry), “a girl of marriageable age” (Pötscher), or “a female partner” (Willi, with previous bibliography). Chantraine, on the other hand, inclines towards a pre-Greek origin for both Mycenaean words. Whichever of these may be true, a solution to the problem of the name would not explain the whole issue of Hera’s origin. Associated as Hera is with Zeus from the Mycenaean period onwards, it is possible that the pair preserves certain characteristics of an Indo-European divine couple. However, searching for the origin of Greek gods is not a simple task and, even if this proved possible for Hera, scholars would not necessarily thereby better understand her functions in the Greek pantheon.