In Greek myth, Amazons were fierce female warriors, arch-enemies of the Greeks, dwelling around and beyond the Black Sea. Depicted in ancient literature and art as the “equals of men,” Amazons were as brave and skilled in combat as male warriors. Glorying in riding horses, hunting, warfare, and sexual independence, Amazons were deemed formidable adversaries of the greatest Greek heroes of myth. Bellerophon battled Amazons, and Heracles, Theseus, and Achilles each proved their valour by defeating powerful Amazon queens—Hippolyte, Antiope, and Penthesilea. Amazons and Amazonomachies (battle scenes) were extremely popular in Greek art, in public spaces and on privately owned pottery. In the myths and artistic representations, Amazons were consistently portrayed as courageous, athletic, attractive, and heroic, running towards danger, and fighting and dying valiantly in battle. Amazons were first described in Homer’s Iliad as antianeirai, which can be translated as “men’s equals.” Many classical scholars consider Amazons to be purely fictional figures with no basis in reality, invented by Greek men to serve as “anti-women” and/or to symbolize Persians. Notably, ancient authors such as Herodotus (4.110–117), Plato (Laws 7.804–814), and Strabo (11.5.1) associated the Amazons of myth with real, contemporary female horsewomen-archer nomads of “Scythia” (Eurasia). Modern archaeological excavations of ancient burials of armed women, identified by bioarchaeology and DNA, from the Black Sea to Central Asia, now suggest that nomadic horsewomen-archers of the steppes influenced some ancient Greek ideas and images of Amazons (Amazons, Wiley Encyclopedia of Ancient History).

Amazons’ first appearance in extant literature is in the Iliad (2.814, Queen Myrine’s tomb near Troy; cf. Strabo 12.8.6, Amazons killed in Lycia by Bellerophon). The Trojan king Priam reminisces (3.188–189) about seeing Amazons joining Troy’s allies when he was a boy, foreshadowing their alliance with Troy in the Trojan War.1 The conclusion of the Iliad (24.804) anticipates the arrival of Penthesilea and her Amazons, a story taken up in the lost epic Aethiopis by Arctinus. M. L. West suggests that Aethiopis may have combined two separate epic traditions about Troy’s allies, the Amazons and the Ethiopians led by Memnon.2 The story of Penthesilea and her Amazons was retold in Quintus Smyrnaeus’s Fall of Troy (perhaps 3rd century ce). On the battlefield at Troy, Penthesilea and the Greek champion Achilles were equally matched, but Achilles won and supposedly fell in love with the Amazon as she was dying.

A fictional narrative about Amazons of Libya, summarized by Diodorus Siculus 3.52–55, was not an ancient Greek myth but a Hellenistic fantasy melange in a lost story by Dionysius Skytobrachion of Alexandria, composed in about 150 bce; he may have drawn on local folklore about warrior women of North Africa.

Amazons and Amazonomachies were immensely popular in art, from the 7th century bce on. Dietrich von Bothmer’s Amazons in Greek Art analyses the imagery in hundreds of ancient vase paintings and sculptures.3 In artworks, the women are represented as attractive and fearless, fighting heroically against Greek warriors. Unlike the Persians and other living enemies on the point of death at the hands of Greeks, Amazons were not depicted gesturing for mercy. Most images picture Greek warriors ultimately overcoming the foreign warrior women, but some depict Amazons killing Greeks. Other images in paintings, on coins, and in mosaics show Amazons training horses, donning armour, stringing bows, hunting, worshipping, and performing other daily activities. 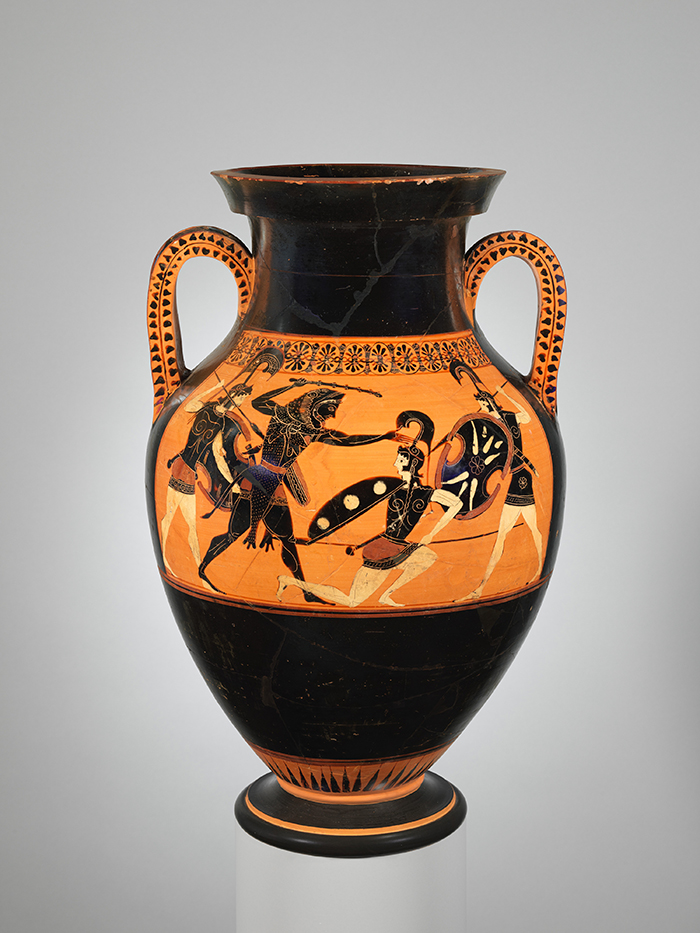 Figure 1. Heracles and Amazons, dressed like Greek hoplites, in combat, amphora c. 530 bce, attributed to painter of the Bateman Group.

The earliest artistic images on pottery visualize Amazons dressed and equipped like Greek hoplite warriors, fighting on foot with swords, round shields, and helmets. Over time, as the Greeks became familiar with real horsewomen-archers of nomadic “Scythian” tribes around the Black Sea, the depictions of Amazons in vase paintings, in sculpture, and on coins began to reflect knowledge of the nomads’ lifestyle and weapons. Instead of female mirror-images of hoplites, some Amazons appear on horseback, wielding bows and arrows, spears, and pointed battleaxes, dressed in patterned tunics, trousers, boots, caps, and with Scythian-style quivers. These details of clothing, weapons, and equipment resemble actual grave goods found in ancient burials of armed women in lands known as “Scythia” in antiquity, from Bulgaria, Ukraine, the Caucasus, Armenia, and southern Russia to Central Asia. 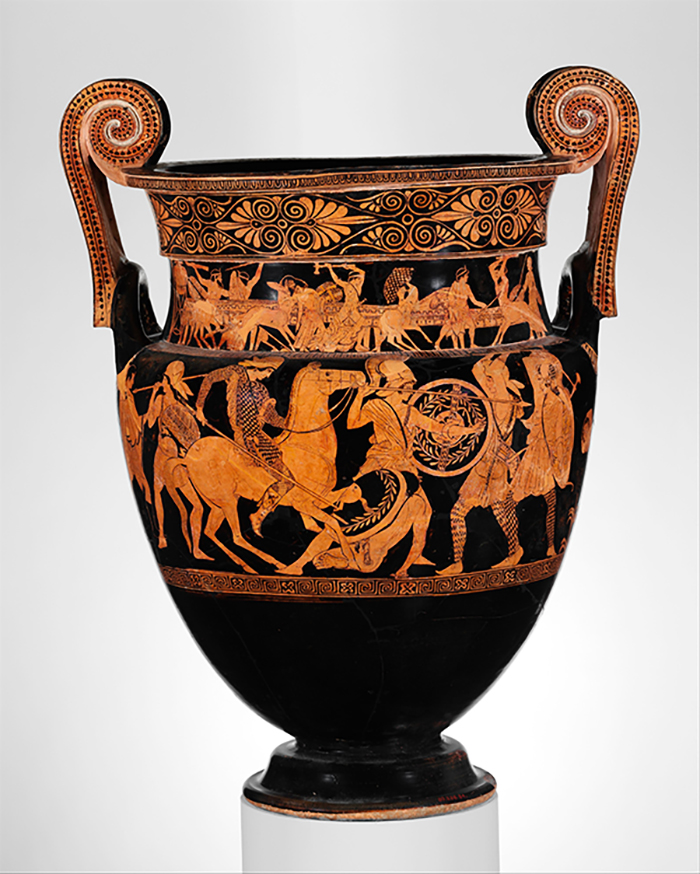 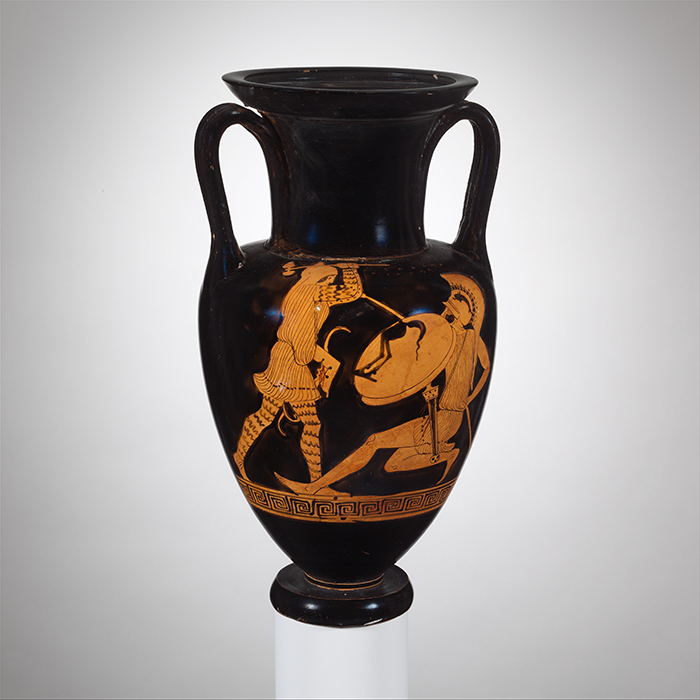 Amazonomachies were popular motifs on temple reliefs, such as the Parthenon on the Athenian Acropolis, the Temple of Apollo at Bassae, and the Mausoleum at Halicarnasus. The great battle with the Amazons who attacked Athens was featured on the magnificent shield of Athena in the Parthenon. Amazonomachies also appeared on wall paintings in the Theseion and Painted Portico, Athens (Paus. 1.17.2, 1.15.2).

Some vase paintings illustrate alternative versions of myths in surviving literature. For example, some artists depict the meeting between Heracles and Hippolyte as a peaceful courtship scene in which Hippolyte offers her war belt to the hero as a gift (cf. Apollod. Bibl. 2.5.9).

Notably, Herodotus, Plato, Strabo, and other writers associated Amazons of myth with living horsewomen of the steppe nomad cultures. Stories of female warriors may have circulated before Greeks encountered real horsewomen-archers of Eurasia, but after Greeks began to settle and trade around the Black Sea (7th–6th centuries bce), they learned about the lives of nomadic steppe peoples, Saka-Scythian-Sarmatians, whose lives centred on horses, archery, warfare, and relative equality of the sexes. Men and women alike wore tunics and trousers or leggings suited to rugged lives on horseback in a harsh land. As Herodotus reported (5th century B), in these groups both boys and girls learned riding, archery, and combat skills, and women rode to war alongside the men. Greek artistic representations began to depict Amazons with the distinctive clothing and weapons of mounted archers.

Ancient graves and shrines were identified as belonging to Amazons in Greece, at Athens and Megara (Paus. 1.2.1, 1.41.7) and Chaeronea, Chalcis, Scotussa, and Cynoscephalae in Thessaly (Plut. Thes. 27). Many cities claimed Amazon founders, and some commemorated them on coins: Amisus, Amastris, Ankyra, Cyme, Priene, Pitana, Sinope, Mytilene on Lesbos, Ephesus, Smyrna, Myrina, Soloi.

Several ancient historians reported that women living the lives of Amazons dwelled around the Black Sea, Caspian Sea, and in Central Asia. In the sixth century bce, Cyrus the Great of Persia allegedly fought and died in battle with the Saka warrior queen Tomyris. During his campaigns after defeating the Persians, Alexander the Great reportedly met several women identified as “Amazons” (Plut. Alex. 46; Arr. Anab. 7.13; Diod. Sic. 17.77). During the Third Mithradatic War (1st century bce) the Roman commander Pompey encountered warrior women called Amazons in the southern Caucasus, and transported a group of captive “Amazons” to Rome for his triumph (App. 12,15.103 and 116–117; Plut. Pomp. 35 and 45).

Greeks were not the only ancient culture with stories and accounts of Amazon-like women of the steppes. Warrior women were featured in tales of Persia, Egypt, Central Asia, India, and China.4

Modern archaeological excavations of about 300 ancient graves containing the remains of horsewomen buried with weapons and horses, from the Black Sea to the Altai region of Central Asia, provide convincing evidence to suggest that genuine warrior women of Saka-Scythian and related groups did exist in antiquity in the locations where the Greeks placed Amazons and Amazon-like female fighters. The ages of the armed women range from 15 to 45; some bear combat wounds like those of the male warriors. The women were buried with the same grave goods as the men: spears, daggers, armour, arrows, quivers, mirrors, tools, jewellery, horse equipment, and in some cases clothing. The weapons, clothing, and equipment match those depicted in Greek vase paintings.5 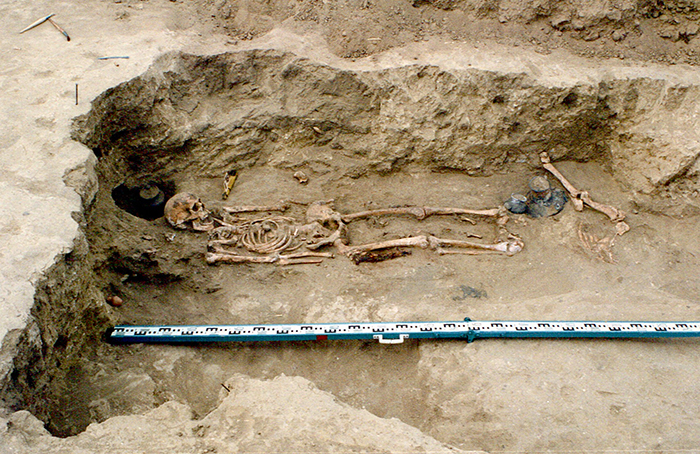 Photo courtesy of James Vedder, Center for the Study of Eurasian Nomads, 1992.

The discovery of an unknown warrior woman’s remains buried with her armour and Scythian-style weapons in the rich royal Macedonian Tomb II at Vergina, northern Greece, raises intriguing questions about her identity. The other remains in the grave belong to a member of Alexander the Great’s family.6

The name “Amazon” was not originally Greek. In an attempt to Hellenize the borrowed name, however, Hellanicus (5th century bce) proposed, on the basis of similar-sounding Greek terms, an etymology meaning “lacking a breast,” which resulted in a claim that Amazons removed the right breast, because breasts hindered drawing a bow or hurling a javelin. But archery and spear throwing are not impeded by breasts. The notion was disputed in antiquity, and no ancient artist depicted one-breasted Amazons. The etymology of Amazon is uncertain and may have had multiple derivations, such as ancient Iranian ha-mazon, “warrior,” or Circassian amezane, “forest or moon mother.”

Modern interpretations of Amazons include the theories that they represented monstrous females, “Others” who were the opposites of ideal Greek women and an inversion of Greek rules about gender and marriage, or that they were a construct of the Greek male imagination, invented only to be killed by Greek men.7 Yet Amazons were portrayed in art and literature as desirable and worthy foreign adversaries for Greek heroes, who can only win glory by confronting and defeating foes of equivalent valour and skill. Notably, Amazons achieve the heroic ideal of a noble death in face-to-face combat that mythic Greek heroes crave but none achieves. Others argue that Amazons stood for the Persians, the real enemies of the Greeks. But Amazons appeared in literature and art before the Persian Wars, and Persians were represented as themselves in Greek art, with no need for cryptic female stand-ins.

Some ancient writers claimed that Amazons were man-hating virgins, perhaps in comparison with the armed virgin goddesses of hunting and war, Artemis and Athena. Some said they maimed sons and enslaved men (Diod. Sic. 2.45), while others called them “man-lovers” (Hellanicus FGrHist 323a F 17c). More than 200 names of Amazons have survived in literature and inscribed on vases.8 Of these, only three Amazons were singled out for taking a vow of virginity. Amazons’ lines of descent in Greek myth were matrilineal (but it does not follow that Amazons are evidence of a prehistoric matriarchy that was later displaced by patriarchy).