Article expanded to include detailed discussion of Greek markets and fairs. Bibliography updated and keywords added.

The single Greek word for market, agora, did not originally refer to a place for exchange; rather, it was a place for the gathering of chattel (as early as Linear B, e.g., Knossos Co 903) and of people. In Homer, the agora is strictly a place of gathering for political action, including military muster. The heroes in epic do not buy and sell; there are no regular markets for the acquisition of food and other necessary things. Heroes take what they want from neighbouring communities by raids. On the fringes of the narratives, however, Homer reveals the presence of one-time or spot markets, most clearly at Iliad 7.467ff.:

Many ships from Lemnos filled with wine lay at anchor, which Jason’s son Euneos had sent … On the side Jason’s son gave the Atreidae Agamamnon and Menelaos a thousand measures of wine to carry off. There the flowing-haired Achaeans got wine, some with skins, others with whole cows, others with spear-captives. And they threw themselves a jolly feast.

There are similar events involving Phoenicians at Lemnos (Il. 23.740–745) and unidentified traders at Scheria (Od. 7.7–11). In each case, payments are made to those in power for access to the local market. These markets are located at the edges of communities, on harbour beaches and piers.

Other markets in Homer are also temporary. The Phoenicians do not bring goods to Syria, sell them, and be on their way; rather, they take up residence down on the docks for a full year before kidnapping Eumaeus, selling him eventually to Laertes (Od. 15.415–484). In reality, prolonged stays by mariners—especially Phoenicians, but also other Levantines, plus Greeks and Cypriots—were required by the limited safe sailing times, but a full year would surely never make sense for visitors outside the context of an emporion.

In addition to these varied one-time markets, there are several references in Homer to the slave markets for spear-captives and kidnap victims, seen most clearly in the tale of Priam’s son Lykaon, who was captured by Achilles and sold to Euneos at Lemnos for a cup worth one hundred oxen (Il. 21.79). Euneos sold him to a xeinos (see friendship, ritualized) of Priam (Il. 21.35–43). Odysseus’s nurse Eurycleia, whose name and pedigree suggest a free person, was acquired by Laertes for twenty oxen, probably at such a market (Od. 1.428–433). Spear-captive markets were located also at Samothrace and Imbros (Il. 24.753).

Hesiod and his fellow agriculturalists routinely put their surplus production onto their own or others’ ships. Hesiod owned a ship large enough to require a bilge-plug; he knew all about caring for this ship (Op. 624–632) and must have taken it out for short trips along the coasts of the Corinthian Gulf. If there were a larger surplus, he put it in another man’s larger ship for a more substantial distance. Destinations are not articulated but must have been one-time/spot markets like the one in Iliad 7. Nautical archaeology supports the ubiquity of the informal, one-time markets: wrecks from the 7th and 6th centuries along the southwestern Anatolian coast carried greatly varied cargoes, and at least two, at Çaycağiz Koyu and Pabuç Burnu, were equipped with small cups (mortaria) for retail sale of foodstuffs to individual purchasers1 upon arrival at a community in the region. This is the cabotage or tramping at the heart of the Mediterranean longue durée.2

Polis markets must have been in place as early as the 8th century bce. Whether or not the border market (ἀγορὰ ἐφορία‎) mentioned in Draco’s late-7th-century bce laws should be placed outside or inside Athens,3 there is no indication that there was a proper market in the agora. Later traditions narrate that Solon and Peisistratus both made efforts to control some aspects of tradeout of Attica, but it is not clear what physical markets they were trying to manipulate. There were shops in the Athenian agora by 500 bce and at least one purpose-built market stoa by 391 bce (Ar., Eccl. 686), but most business was transacted at wooden booths and tables well into the Hellenistic period. Colonnaded market structures did not appear until the 3rd century bce. The only other built market in Attica during the classical period was at Sunium,4 although this may be an accident of recovery.

Aristophanes and the orators write that the agora at Athens offered a dizzying array of specialty products: fish (high end and low end), meat (fresh and carrion), birds. There was available a great variety of vegetables, fruits, and nuts. Foreign and domestic clothing and perfumes were also sold; on the edges of the agora were specialist craftspeople such as cobblers.

Civic enactments at Athens encouraged foreign traders to bring grain and other goods to Piraeus, offering honours in the form of crowns and granting permission to communities of foreign traders (from Citium on Cyprus and Egypt on separate occasions [IG II 337.38–45 = RO 91.38–45]), to purchase land for construction of a house of worship. Local production in Attica was brought to the markets in Piraeus and Athens; Plutarch (Per. 16.3.3–4) relates that Pericles routinely brought his entire production to the agora for sale, returning subsequently to buy what his household needed. 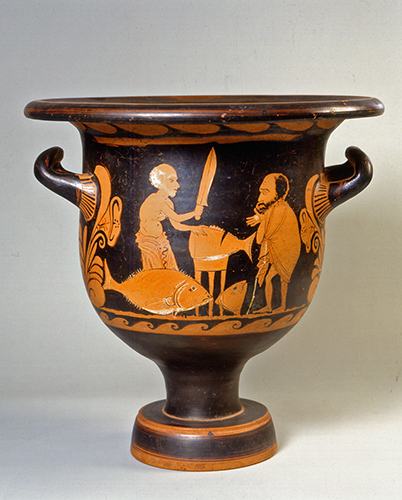 The Athenian assembly in the 5th and 4th centuries bce grew interested in regulating and controlling their markets, especially for grains. They established a force of market officials who imposed quality control measures, limited retail mark-up, and collected tax on retail sales; placed price and mark-up controls on millers and bakers; policed weights and measures; levied a 2 percent tax on grains entering and leaving Piraeus; and oversaw the timely transfer of two-thirds of all grains imported into Piraeus to the city market.5 Similar civic actions at Thasos (SEG 36.790–792) focused on collecting taxes and tariffs within the wine industry there and on protecting growers by restricting futures contracts and riding herd on dishonest exporters.

Periodic markets (“fairs” in Roman and medieval parlance) routinely sprang up at festivals, such as the Olympian and Isthmian Games, and at the Panathenaea. Taxes were regularly waived (e.g., at the Artemis festival in 4th-century Eretria [IG XII 9.189 = RO 73]), and there were times when the commercial fair itself came to dominate a religious gathering (e.g., at Roman Delos [Strabo 10.5.4]). There were also secular seasonal markets in places where there was insufficient demand for a permanent market but where a regularly scheduled flurry of exchange satisfied producers and purchasers. There were monthly such markets even at Athens that brought country residents to the city to meet their needs (e.g., Ar., Vesp. 171). The evidence for periodic markets increases in the Hellenistic period.

More would be known about Greek markets if the Greeks had had more to say about them. Plato’s understanding of the economy in general was not strong, and he betrays no grasp whatever of the importance of haggling to keeping a market’s prices low (Leg. 917B–C); Aristotle criticized retailers and other traders for trying to maximize their gains (Pol. 1257a40–1258b8). In his Poroi, Xenophon appears the first to grasp the subtleties of market forces and fiscal planning, although by then the assembly at Athens was already concerned with protecting consumers at the Piraeus and agora from the market’s inherent advantages over outsiders. Modern scholars on the ancient Greek economy have tended to take sides on the debate between modernists (ancient Greeks did things the modern way: ancient society was a market society) and primitivists (the Greeks did not have a market society),6 as well the argument between formalists (economies of all time periods can be analysed using the tools of neoclassical economics) and substantivists (pre-modern economies were “embedded” in society and cannot be studied independently of society).7 These distinctions have yielded place to the rise of New Institutionalism, which in its zeal to measure every force in play within any transaction or contract has led to new insights8 but also to the risk of linking ancient socioeconomic market activities and modern capitalist ones.9