“Greek” mosaics refers to mosaics that date from the 5th to 2nd centuries bce and appear in contexts associated with the Greek-speaking world in the eastern Mediterranean and Aegean. These mosaics, popular primarily in domestic contexts, were exclusively floor decoration. From the 5th to 3rd centuries, mosaics were most often made of naturally shaped and coloured pebbles set into plaster; their designs and iconography vary. Experimentation with mosaic materials in the 3rd century included the development of tesserae, which are pieces of glass, stone, or ceramic cut into regular squares that can be set flush with one another. By the 2nd century, tessellated mosaic techniques that take advantage of the precision of tesserae were widespread throughout the eastern Mediterranean.

For the purposes of this entry, “Greek” mosaics refers to mosaics that date from the 5th to 2nd centuries bce (i.e., prior to Roman hegemony in the Mediterranean) and appear in contexts associated with the Greek-speaking world in the eastern Mediterranean and Aegean. Like their Roman counterparts, Greek mosaics are exclusively floor decoration. Until the development of tesserae in the 3rd century, these mosaics are dominated by the use of naturally shaped and coloured pebbles set into plaster or clay.

Unpatterned pebble pavements survive from the Bronze Age Aegean. Mosaics with simple geometric designs are known from the 9th and 8th centuries bce in the Levant and Anatolia, with well preserved examples from Gordium in Phrygia (Figure 1). It seems likely that such predecessors influenced the emergence of decorated pebble mosaics in Greece, but the precise nature of this influence and its chronology are unclear. The earliest Greek decorated mosaics are from Athens, Corinth, and Olynthus, most dating to the second half of the 5th century bce. In these early phases, the decoration was primarily simple geometric or figural forms rendered in black and white.

Over the course of the 4th century bce, pebble mosaic compositions made use of a greater variety of colours, including gray, red, and yellow, and decorative schemes became increasingly complex. The finest examples of pebble mosaics incorporate modelling and shading and the rendering of three-dimensional effects, achieved through attention to subtle gradations in the stones’ colours and the use of small pebbles, which can be set closely together to produce precise detail. Occasionally, lead or terracotta strips were added for crisper outlines.

Pebble mosaics of the 4th and early 3rd centuries bce survive at Olynthus, Pella, Sicyon, Eretria, on Rhodes, and around Athens (including Piraeus). Additional individual examples at Vergina (Aegae), Aegeira, Nea Paphos, Alexandria, and the Black Sea coast suggest that decorative pebble floors were widespread through the Aegean and possibly in Anatolia. Outstanding examples of the late phase of pebble mosaics come from the palatial houses that surround the agora at Pella in Macedonia, dated to the final decades of the 4th century (Figures 2 and 3).

Figure 2. Pebble mosaic of a lion hunt from the House of Dionysus, Pella, 4th century bce.

Figure 3. Pebble mosaic of a stag hunt from the House of the Abduction of Helen, Pella, 4th century bce. 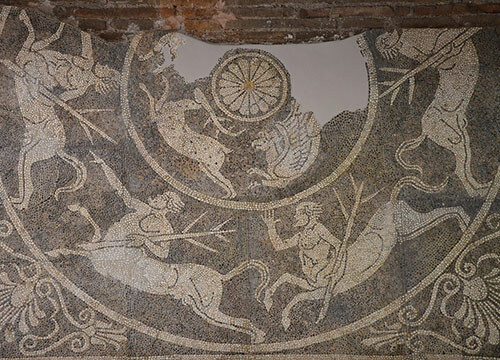 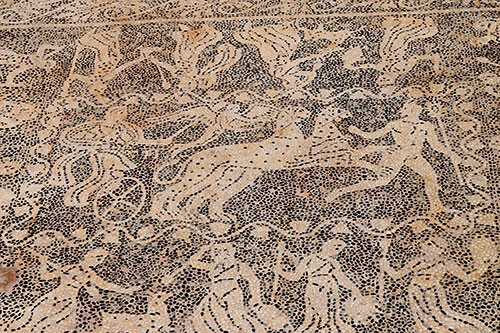 Source. Photograph by H. M. Franks; the rights to the monument depicted belong to the Hellenic Ministry of Culture and Sports (Law 3028/2002). 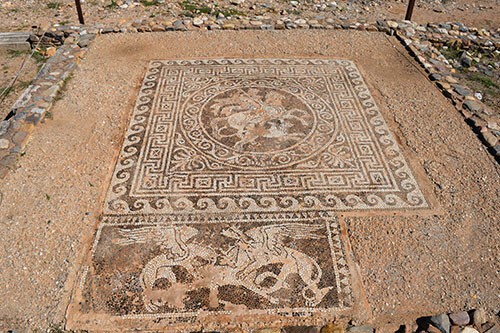 Source. Photograph by H. M. Franks; the rights of the monument depicted belong to the Hellenic Ministry of Culture and Sports (Law 3028/2002).

The compositions of floors also vary. Certain floors feature a central figural scene with an ideal viewpoint in the room’s entryway. Some have posited a relationship between these compositions and painting, a medium that also flourished in the 4th century but is now largely lost. Other floors make use of a frame-in-frame composition, in which concentric registers surround a central image, often a star or wheel. Popular by the end of the 4th century is a “carpet” style, in which a floral pattern extends from the centre and covers the floor (Figure 7). It is possible that these latter compositional arrangements, which privilege no particular viewing point, may imitate textiles. The precise relationship of mosaics to other media, whether painting, textiles, or vase-painting, remains unclear. 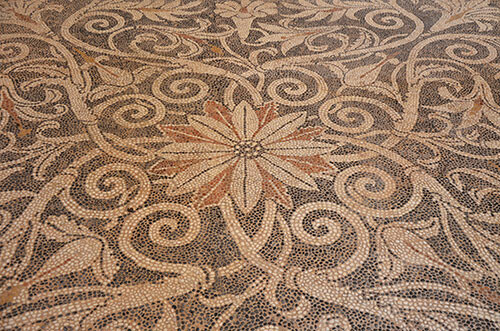 It seems to be the case that pebble mosaics were strongly, although not exclusively, associated with domestic contexts and particularly with rooms intended for entertainment. In 4th-century houses, mosaic floors often decorated the andron, the room dedicated to the symposium, or its anteroom. The themes and compositions chosen for these mosaics may have evoked cultural symbols or metaphors around wine drinking or the ritualized patterns of movement that characterized the symposium. In the palaces and elite houses of Macedonia from the end of that century, mosaics appear in more monumental rooms, still sometimes arranged to accommodate symposia but also suitable for larger-scale banquets that seem to have played a major social and political role in the kingdom.

Experimentation with various cut- and chipped-stone and mixed techniques suggests that the active pursuit of alternatives to natural pebbles was occurring in multiple locations in the 3rd century. The tessellated mosaic technique—opus tessellatum, in which pieces of stone, glass, or terracotta, called tesserae, were cut into a cubic shape and fitted flush with one another in mortar—replaced the use of pebbles by the 2nd century. The precise circumstances of the development of this technique are unclear. A mosaic of erotes (winged figures associated with love) hunting a stag from Shatby, near Alexandria, and a griffin at Rhodes (Figure 8) represent a possible transitional phase. Both primarily use regularized tesserae, but also incorporate naturally shaped pebbles. 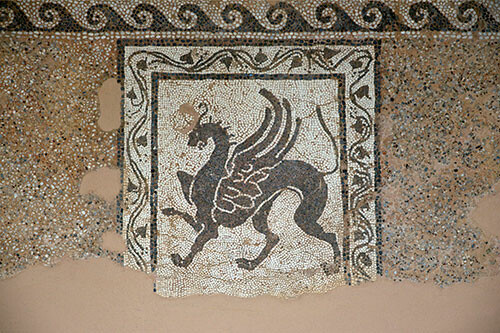 Figure 8. Detail of griffin mosaic showing mixed use of pebbles and tesserae from Rhodes, 3rd or 2nd century bce.

Source. Rhodes Archaeological Museum. Photograph by H. M. Franks; the rights to the monument depicted belong to the Hellenic Ministry of Culture and Sports (Law 3028/2002).

In the 2nd century, a technique called opus vermiculatum was in relatively wide use. This technique involved the use of minute tesserae, some as small as 1 mm, that allowed mosaicists to produce a still more intricate, painterly effect. Mosaics of opus vermiculatum were often produced as emblemata—pictorial mosaic panels that were prepared separately and then set into a reserved space that was surrounded by a mosaic of larger tesserae. An emblema from Alexandria of a dog next to an overturned pitcher (Figure 9) offers a whimsical example of the precision possible in this technique.

Figure 9. Mosaic of a dog from Alexandria, 2nd century bce.

In addition to this and other examples at Alexandria, tessellated mosaics survive from Hellenistic Pergamum and Delos. At Delos, mosaics are preserved primarily in private houses from the 2nd and 1st centuries bce. They include a wide range of subjects and techniques, some familiar already from pebble mosaics.

A few mosaics were signed, but the only mosaicist to be named in literary sources is Sosus of Pergamum (Plin. HN 36.184), who was known for his mosaic representation of an unswept floor (asarōtos oikos). This mosaic is not extant, but Roman examples of the theme survive. The mosaic creates a trompe l’oeil, in which the surface of the floor appears covered in the scraps of an extravagant banquet. Sosus was known also for his mosaic of doves drinking; a similar theme, possibly a copy, survives in a mosaic from Hadrian’s Villa at Tivoli (Figure 10).