Villa was the Latin word for a rural dwelling associated with an estate, and villas ranged in character from functional farmhouses to luxurious country seats for the élite (Varro, Rust. 1.11.1–1.12.4; 3.2.1–18).1 Most of the literary evidence for villas relates to Italy and primarily describes farms run for the benefit of urban-based proprietors (e.g., Vitr. De arch. 6.6.1), though the most opulent seaside villas of the Roman aristocracy were sometimes built solely for pleasure. Aristocratic enjoyment of rural retreats and pride in creating architectural splendours there are well attested (e.g., Plin. Ep. 2.17), but the classic Italian villa, comprising not only a luxurious dwelling for the use of the owner on visits to the estate (pars urbana) but also working farm buildings (pars rustica) and storage buildings and barns (pars fructuaria), is perfectly illustrated by the excavations at Settefinestre, which have uncovered an aristocratic domus (mansion), baths, slave quarters, wine and olive presses, a piggery, a substantial granary, and formal gardens (cf. Columella, Rust. 1.4.6–1.6.24).2

Though country villas preserve many of the standard components of a Roman domus, their layout can vary (Vitr. De arch. 4.5.3). The development of villas across different regions of Italy from the 2nd century bce is generally explained in terms of the rise of large slave-run estates (see latifundia), though these regions commonly exhibit divergent patterns of rural settlement and varied types of villa ranging from simple farmhouses to palatial mansions. Similarly, the relative success and longevity of villas differed from one part of Italy to another: certain coastal areas famous for viticulture in the late Republic had declined markedly by the 2nd century ce, whereas villas in some inland areas survived into late antiquity.

Recent work on the seaside villas along the Bay of Naples has expanded our understanding of the culture and architecture associated with the late Republican and early Imperial period villas.3 Many of these villas were likely the property of the senatorial class in Rome and were used by the city’s elite as lavish retreats during the summer months. Displays of wealth survive in the so-called Villa of the Papyri at Herculaneum, a seaside retreat or villa maritima which served as a backdrop for a collection of over eighty marble and bronze sculptures, and whose library housed over eighteen hundred scrolls. Another villa maritima, Villa A at Oplontis (the so-called Villa of Poppaea) stood on a cliff overlooking the sea and included opulent entertainment spaces, a bath, slave quarters, and a sixty-meter swimming pool. Many such luxury villas combined with working farms and cities to fill the landscape along the entire Bay of Naples (Strabo 5.4.8), with documented examples at known Roman sites such as Baiae, Stabiae, and Surrentum, as well as the modern locations of Torre del Greco, Boscoreale, and Boscotrecase. South of the Sorrentine peninsula, villas dotted the coastal mountains of the Amalfi Coast at such places as Positano and Minori. The so-called Villa of the Mysteries condenses both the working and luxury aspects of larger estates into a comparably compact but opulent suburban villa (villa suburbana) built on a platform or basis villae, just outside the walls of Pompeii (see Figure 1). The Augustan-period villa at Somma Vesuviana survived the eruption of Vesuvius in 79 ce only to be destroyed by another eruption in the 5th century. 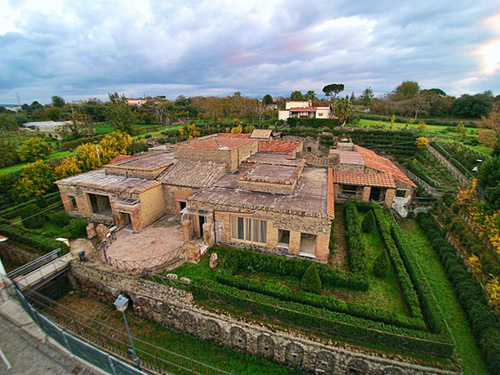 Figure 1. The Villa of the Mysteries.

The luxury retreats of the senatorial class provided the impetus for imperial villas which in most cases were defined by their extravagant scale and elaborate architectural designs. Early examples include the Villa of Livia at Prima Porta, the Villa Jovis of Tiberius on Capri, the Villa of Nero at Antium, and the Villa of Domitian in the Alban Hills. No villa surpasses that of Hadrian at Tibur in terms of scale and innovation, and the emperor himself is believed to have contributed to its design (see Figure 2). The Villa Magna in Agnani has been tied to Antoninus Pius and Marcus Aurelius and included a sizeable winemaking facility. Though its supposed ownership by a tetrarch has recently been challenged, the impressive mosaics, tetrarchic symbolism, and expansive agricultural holdings of the Villa Romana at Casale in Sicily (see Figure 3) at the very least suggest a high-level, aristocratic owner with close ties to the emperors. 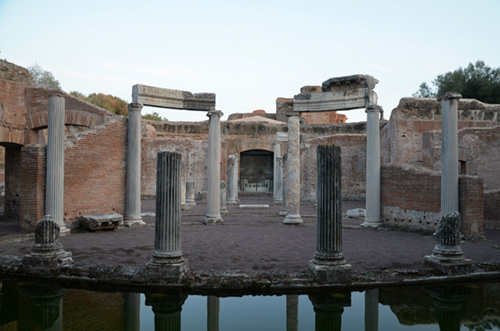 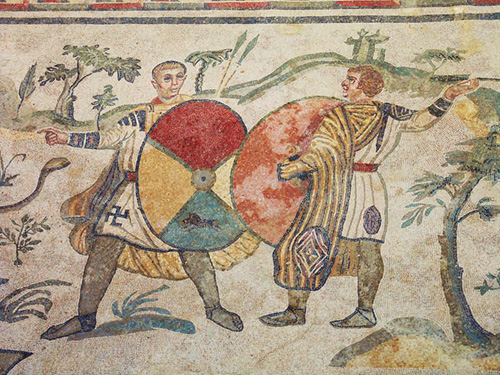 Many of the provincial Mediterranean villas adhered to the architectural language of their Italian counterparts, especially those along the Mediterranean basin. Though for many years evidence for provincial villas was limited, recent research and fieldwork have brought many new examples to light. Significant regional variations are sometimes found in peripheral territories such as Britain, where it can be exceedingly difficult to decide whether a particular structure would have been considered a villa by the Romans themselves. Various widely-used criteria have defined villas in terms of different aspects of Romanized construction and lifestyle (presence of mosaics, painted plaster, dressed stone and tile, hypocausts, baths, etc.). Mediterranean peristyle houses are uncommon in Britain and Belgica (see Gaul, Transalpine), where winged-corridor and aisled buildings tend to predominate, and other regions also reveal their own characteristic styles. In Britain especially, a broad array of approaches have been used to look beyond Romanized buildings and explore subsidiary farm buildings, field systems, pre-Roman and sub-Roman phases of construction, and palaeo-economic evidence for crops and livestock (see agriculture, Roman).