Ben-Hur: A Tale of the Christ, a historical romance novel set in 1st-century Judea and Antioch, was written by Lew Wallace (1827–1905) and published by Harper & Brothers in 1880. It has generated more successful popular artistic by-products and had a larger commercial impact than any other modern literary property within the Greco-Roman tradition. The novel’s protagonist, Judah Ben-Hur, is a wealthy Jewish teenager betrayed by his Roman friend Messala and enslaved in a naval galley, where he rescues the tribune Quintus Arrius, who in turn adopts him. Judah returns to Judea, defeats Messala in a chariot race in Antioch, and then raises three legions to support the new “King of the Jews,” whose message of peace he ultimately realizes.

The novel did not become a bestseller until 1885, when Wallace, a retired Civil War major-general turned Indiana attorney and literary businessman, wrote a prequel for one of Harper’s magazines and then embarked on lecture tours, most notably reading aloud the chariot race passage to several thousand enthusiasts at Chautauqua in 1886. Attracting a diverse readership, the novel offered them such action sequences as the chariot race and a naval battle between Romans and Aegean pirates. These were complemented by an eyewitness description of the Passion informed by Wallace’s unique Christology, inculcated by his stepmother, Zerelda Bishop Wallace, a devotee of the Stone-Campbell movement and member of the Church of Christ. In the ensuing years Harper sold hundreds of thousands of copies in the United States, while in England as many as two thousand unauthorized copies were sold each week. Exceptional sales figures continued for four decades, highlighted by Sears, Roebuck’s record purchase of an additional one million volumes in 1913. Translated into many languages and still ranked as a bestseller in the 1930s, the novel remained in print in 2015.

Having grown up on the frontier without formal education, Wallace employed a limited number of sources to furnish the names of ancient Roman characters (Messala, Arrius) and incidents that would become familiar to tens of millions of Ben-Hur readers and subsequent film audiences. As a child he read Plutarch (e.g. Pyrrh. 34; Ant. 60.1; Brut. 40.1–2; Cic. 15.3; Pomp. 39.2). His father, a West Point graduate, introduced him to Gibbon (1.16) and Thucydides (2.34–46). In 1873 Ainsworth Spofford at the Library of Congress introduced him to Josephus. Like Josephus (Vit. 13; 422–30), Wallace’s protagonist experiences a shipwreck, rescue, and elite acceptance in Rome, and Josephus (AJ 18.2) was the source for Wallace’s Roman procurator Valerius Gratus, as well as the name Simonides. Wallace sometimes paraphrases Smith’s Latin dictionaries, although he confuses the length of the Antioch hippodrome spina with a stadion and perpetuates the misconception that galley slaves rowed for the Roman imperial navy. The few Latin terms he uses (e.g. duumvir) had to be corrected by Charlton Lewis, one of Harper’s readers in 1880.

Diligent in protecting their copyright but limited by the lack of intellectual property laws, Wallace and Harper monitored the multiple unauthorized adaptations of Ben-Hur that began to proliferate in the late 1880s. The numerous musical compositions inspired by Ben-Hur, ranging from G. W. Chadwick’s art song “The Lament” to E. T. Paull’s celebrated ragtime “Ben Hur, or the Chariot Race March,” were beyond their reach. But they sought redress for copyright infringement against Ellen Knight Bradford’s dramatic readings in “An Evening With Ben-Hur” and the Riley Brothers’ printed synopses sold with their stereopticon slides, succeeding legally where Harriet Beecher Stowe, Charles Sheldon, and other prominent nineteenth-century authors failed.

Wallace and Harper licensed excerpted passages from Ben-Hur as gift items and for pedagogical anthologies, and Wallace himself published the libretto for Ben-Hur, in Tableaux and Pantomime, an elaborate production that toured successfully for ten years. Although Wallace meanwhile repeatedly refused petitions to produce fully dramatized adaptations, he finally signed a contract with Marc Klaw & Abraham Erlanger in 1899 for an unprecedented 10 percent royalty while maintaining authorial approval.1 Over the next two decades at least ten million spectators in the United States, Canada, England, and Australia witnessed the approximately six thousand performances of this record-setting production, with a live chariot race employing eight horses on treadmills, a cyclorama, and several electrical motors.

Protecting his father’s property against new types of incursion in 1907, Henry Wallace joined Harper and Klaw & Erlanger in a suit against Kalem, the first film company to produce a cinematic adaptation. The high-profile “Ben-Hur Case” reached the U.S. Supreme Court in 1911 and established the precedent for copyrighting films as independent dramas. The $25,000 fine paid to Wallace, Harper, and Erlanger made the 1907 Ben-Hur the costliest film production of the decade. Wallace later sold the film rights for Ben-Hur for an unprecedented $600,000 to Erlanger, who in 1922 sold them to Samuel Goldwyn for a reported $1 million plus half of the film’s gross. The costliest film of the silent era, this $4 million MGM Ben-Hur earned over $9 million in its initial release in 1925, was reissued with “synchronized sound” in 1931, continued to play in Europe and Asia throughout the 1930s, and earned $11 million worldwide, another record set by a Ben-Hur byproduct. Even more lucrative, the $15 million, 65 mm, stereophonic sound version released by MGM in 1959 was the costliest film of its day, garnered a record 11 Academy Awards, became one of the top money earners of all time (adjusted for inflation), was accompanied by an unprecedented merchandising campaign, and in 1971 attracted a record television audience of 60 million viewers. The chariot race became an iconic Hollywood action sequence, and Miklós Rózsa’s score has warranted several scholarly studies. The next decades produced both well-received, high-profile video and DVD restorations of both MGM films, and additional adaptations for stage, radio, and television. Most successful was Robert Hossein’s dramatic spectacle performed at the Stade de France in 2006.

Unencumbered by trademark restrictions or intellectual copyright laws, the novel’s iconic name (with or without the hyphen) widely permeated the commercial world, which exploited the Ben-Hur name and Roman chariot imagery in ways that became practicable in late nineteenth century but could not be duplicated legally in the twenty-first. By the late 1880s, companies were already manufacturing brands of Ben-Hur Cigars and Ben-Hur Flour, followed by dozens more Ben-Hur companies, brands, products, and fraternal organizations, many of them using quadriga logos derived from copyright-free European paintings by Alexander von Wagner and Ulpiano Checa (Figure 1). 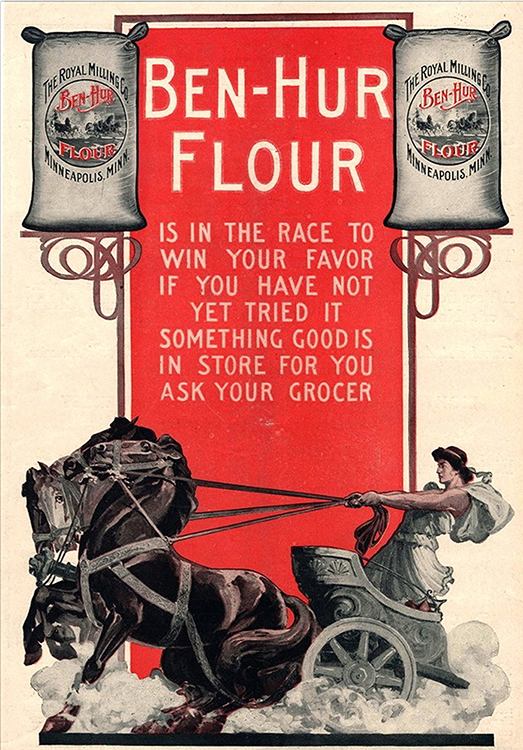 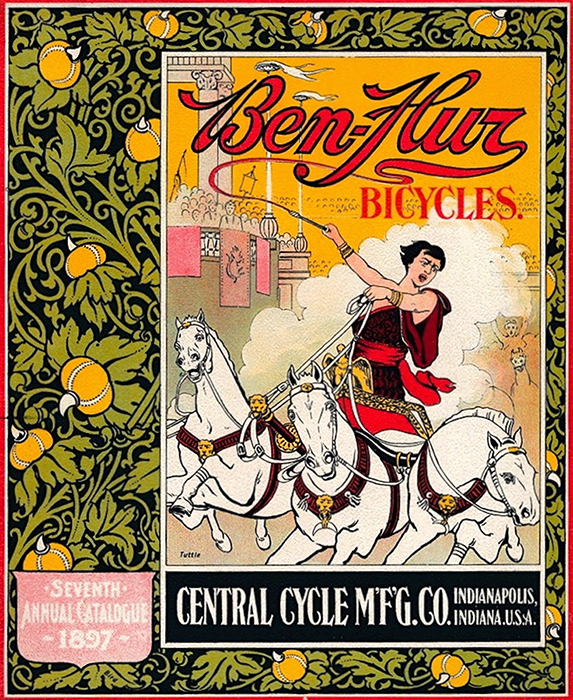 Streets and even towns were named Ben Hur. Combined (and adjusted for inflation), the authorized and licensed adaptations of Ben-Hur along with independent Ben-Hur companies, businesses, brands, and products have amassed billions of dollars and perpetuated the Ben-Hur name and its chariot imagery throughout the popular culture.