Anal sex with males and females, amply attested in Greece and Rome, was subject, especially for free males, to distinct normative and legal constraints that varied from place to place, changed over time, and did not always align with real-life behaviour but had basic elements in common. Since sexual attraction to both genders was considered normal, the main divisions concerned age, social status, and role: females and smooth males (boys 12–18) were desirable objects, hairy males (men) undesirable; the active partner was penetrative and thus masculine, the passive partner penetrated and thus female or effeminate, so that it was shameful and improper, slavish, and arguably unnatural for free males of any age to play the passive role whether for a price or voluntarily except in certain initiatory or military contexts institutionalized in some communities. No comparable sanctions applied to the active partner.

Anal sex with both males and females, amply attested in Greece and Rome, was subject, especially for free males, to normative and legal constraints that varied from place to place, changed over time, and did not always align with real-life behaviour but had basic elements in common.1 Sexual attraction to both genders was regarded as normal; for men, females and smooth males (boys typically 12–18 years old) were considered desirable objects, hairy males (men) undesirable, so that the relative merits of boys and girls (but not men) as sex objects was a perennial topic of conversation.2 The active partner was penetrative and thus masculine, the passive partner penetrated and thus female or effeminate, so that it was generally regarded as shameful and improper, slavish (slaves being sexually available to masters), and unnatural (para physin Xen. 2.1.31, Pl. Leg. 836e) for free males of any age to play the passive role whether for a price or voluntarily (to gratify a lover or, worse, to satisfy reciprocal lust: the anus as a site of pleasure for the penetrated partner was physiologically abnormal according to [Arist.] Pr. 4.26), except in certain initiatory or military contexts institutionalized in some communities, such as Crete, Elis, Boeotia, and Sparta (but not Athens or Rome).3 No comparable sanctions applied to the active partner. Comic poets, satirists, and orators routinely alleged that someone enjoyed (often promiscuously) the passive role and/or had prostituted himself for money or political advancement.4 Anal rape was a humiliation threatened against defeated enemies, trespassers (thematic in the Carmina Priapea), adulterers (Ar. Nub. 1083–1084, Isae. 8.44, Catull. 15.18–19, Juv. 10.317), and effeminates (Ar. Thesm. 59-62, Catull. 16). Since boys, unlike girls, left the house for school and exercise, they risked rape or seduction, so that fathers might assign a pedagogue to guard them (Aeschin. 1.9–14, Quint. 1.2.4, 2.2.1–5).5 While exclusively homosexual orientations, active and passive, were acknowledged (and regarded as innate by Aristophanes in Pl. Symp. 189c–193), adult male relationships were never respectable and were normally pursued as a subculture, less visibly for Greece than for Rome, as portrayed by Petronius’ Satyricon and the satirists (cf. Juv. 2.47: magna inter molles concordia, “among the sissies is great fellowship”).6

Pederasty, the main focus of our sources, was normatively framed as a relationship between an erastes (hairy “lover”) and his eromenos (smooth “beloved”) and was variously ritualized in Greek communities to safeguard the honor of both parties. In democratic Athens, any male citizen who had ever submitted to anal (or worse, oral) sex could be debarred from the communal life of the polis—from addressing the Assembly or entering the temples (Arist. [Ath. Pol.] 18.2, Aeschin. 1), and while there was no statute forbidding the penetration of a free boy by seduction (without force or payment), orators and moralists regarded it as dishonorable (e.g., Lys. 3.4, Pl. Phdr. 234b, Aeschin. 1.14 [the seducer Misgolas], 2.166, Isoc. Helen 58), and the boy’s family may have had recourse to some form of redress, perhaps the law of hybris (“assault,” which covered rape or seduction, cf. Xen. Mem.2.1.24, 30, 6.21), as under the Roman law of stuprum.9 Among the Athenian upper classes, pederasty was idealized along traditional lines, featuring aristocratic gift-exchange and emphasizing mentoring that would inspire both parties to manly distinction, so that the eromenos could and was expected to deny his erastes anal sex. Socratic apologists distinguished the spiritual eros of a noble erastes from common physical eros in their effort to absolve their master of the charge of corrupting the young (hence “Platonic love”). By contrast, comic poets reflected popular sentiment in regarding the erastes—eromenos relationship cynically, as an example of elite (and old-fashioned: Ar. Eq. 1384–1387, Nub. 961–1023) hypocrisy; the populist leader Cleon is said to have made “fucked men” a particular target (Ar. Eq. 876–877). Thus young men like Chaereas’ son at Ar. Vesp. 687–688, who flaunts his effeminacy, are assumed to submit, “the whores” taking money, “the decent ones” asking for “a good horse or hunting dogs” because “no doubt ashamed to ask for money, they conceal their wickedness with fine words” (Plut. 153–159); on Olympus too, the relationship of Zeus and Ganymede must really be anal (Pax 724). 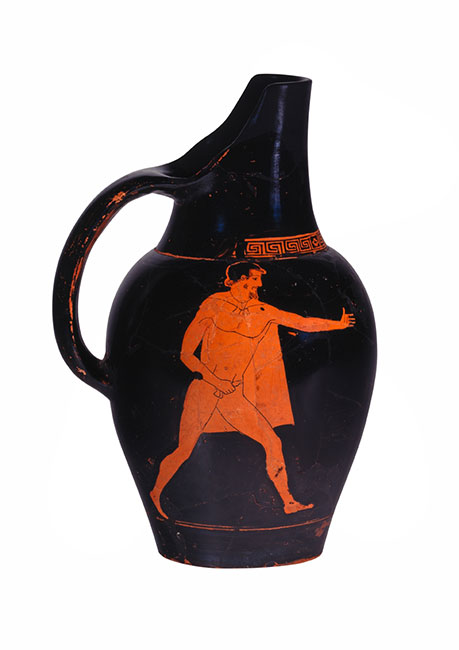 Such obscenity and invective tends to be more violent and less playful than in Greece, and more prominent at both low and high cultural levels; even Greek invective epigram tends to avoid outright obscenity, not so Roman (cf. Catullus, and Martial’s preface to Book 1).13 While the Greeks tried to integrate pederasty into initiatory and educational structures and otherwise wrestled with the ambiguous position of the free passive partner, Romans emphasized dominance and submission, and anal sex, including female (CIL IV.1516), is more frequently associated with such repellent subjects as excrement (Priap. 17, Martial 11.88, 13.26), anilingus (Catull. 97, 98), and hemorrhoids (“figs”: Mart. 2.13, 12.20). This more aggressive affect reflects the Priapic model of Roman manhood, on full if often ironic display in the Carmina Priapea, and its antitype the cinaedus or pathicus, who was effeminate (mollis). By contrast with the Greeks, who regarded a large penis as satyric or barbaric (Ar. Nub. 1009–1019), Romans stress phallic authority and a passive and female predilection for a large penis both on boys and on adults (drauci “studs,” e.g., Mart. 11.72; Catull. 115.8, Petron. 92.8–9, Mart. 1.96, 2.51, 9.33, 11.63), as is programmatic in Priapic boasts (Priap. 1.5 membrosior aequo “hung better than average”).14 Passive typology includes neglect of wives (the patron in Juv. 9 expects his client Naevolus to penetrate him as well as to service his wife); but at the same time, cinaedi are associated with adultery and sexual excess, similarly Caesar “the husband of every wife and the wife of every husband” (Suet. Iul. 52.3, cf. 49 “Nicomedes . . . who prostrated Caesar”), Catiline (Cic. Cat. 2.8), or Verres (Cic. Ver. 2.2.192).

Pederasty of the sort associated with the Greeks (Cicero Tusc. 4.70), that is, the public courtship of free-born young men by citizen males, was strictly policed: the concept of stuprum (legally defined in the lex Scantinia) forbade extramarital sex with freeborn persons of either sex, and sex between free adult men was strongly disapproved and sporadically criminalised: the seduction of young freeborn males in the early republic was a capital offense, and submission was a sign of character deficiency.15 This law was named for C. Scantinius Capitolinus, who in 227 bce was convicted of soliciting a free boy for sex (Val. Max. 6.1.7). The lex Julia de adulteriis coercendis also included stuprum cum masculo. There was no Greek-style educational framing. In the 2nd century bce attitudes began to soften, to some extent as a result of the craze for things Greek and the increase in enslavement and patronage, so that when interpreting literary evidence intertextual relationships with Greek models become a factor in attempting to identify distinctly Roman features. In the late republic, pederasty was frequently used to contrast Roman and Greek morality (e.g., Plut. Quaest. Rom. 274d– e, Cic. Tusc. 4.70–71). All homosexual relationships were harshly condemned by Christians, anal penetration being punishable by death in the Theodosian Codex of 390 (Cod. Theod. 9.7.6).