The Lemnian language was spoken by the inhabitants of Lemnos, an island in the northern Aegean, in the period before Attic Greek colonization. Lemnian is preserved on sixteen inscriptions dating to the second half of the 6th century bce. Most inscriptions are single words incised or painted on ceramic vessels.1 Inscriptions on stone monuments provide the bulk of the evidence for the language.

Lemnian inscriptions were written in an alphabet that had its roots in Phrygia, but several letters—theta, phi, and khi—were borrowed from Greek. Other accommodations were made in order to represent more faithfully the Lemnian sound system. The letters for voiced stops and for the vowel ypsilon were eliminated. Words in inscriptions were separated by punctuation in the form of a colon or a tri-colon ⋮. The direction of writing was typically left to right, but lines in longer inscriptions were frequently written in boustrophedon style.

The longest and most important inscriptions are on the funerary stele of Kaminia, discovered in 1884 embedded in the wall of a church (see figure 1).2 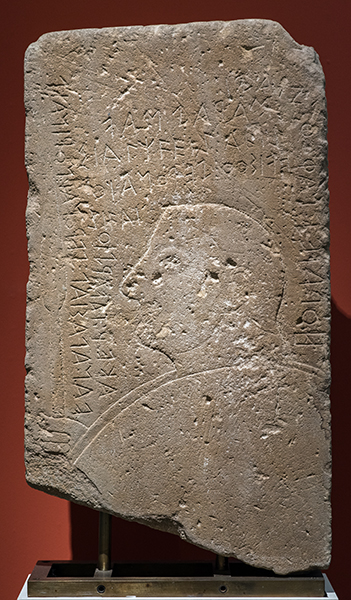 Figure 1. The Stele of Kaminia.

The stele is a tongue-shaped slab of local sandstone whose face was smoothed and cut with the profile of a warrior who wears a cap and is armed with a lance. He holds a large shield that covers his body. At least some of the bottom of the stele is missing, but how much is disputed. The stele bears two inscriptions. Inscription A is on the face and fills the space behind (a), above (b), and in front of (c) the head of the warrior. Inscription B is written in two parts, (a) and (b), on the stele’s right side. Inscriptions A and B were inscribed by different craftsmen. The letters theta, omicron, and phi have rounded forms in A, but quadrangular forms in B.

Although the inscriptions cannot be translated in their entirety, several phrases are intelligible, all of which point to funerary texts in honor of a Greek named Holaie Phokiaš‎ (holaiesi: φ‎okiaš‎iale “for Holaie Phokiaš‎” [inscription B]). Holaie died at forty years of age (sivai: avis: š‎ialχ‎vis, “he lived for 40 years” [inscription B]) and held an official position referred to as maras (marasm: avis: aomai, “and he was maras for a year” [inscription B]).

Excavations undertaken in the 1990s by the Italian Archaeological School of Athens at the site of Efestia brought to light a stone altar base (see figure 2).3 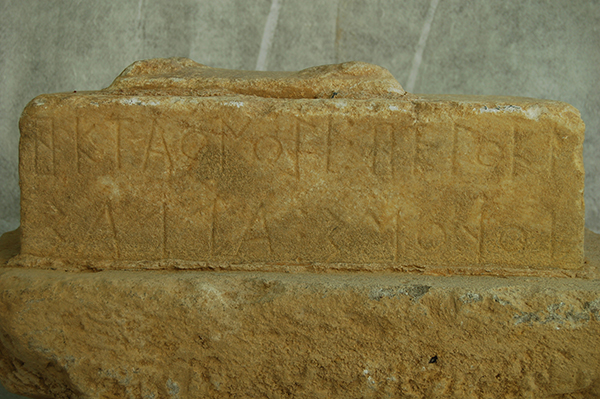 Figure 2. Inscribed altar base of Efestia.

The front of the base was incised with four words arrayed in two lines in boustrophedon writing.

The meaning of the verb heloke can be deduced by comparison with Etruscan helu (“constructed”) and confirmed by context.4 Although the remaining words are of uncertain meaning, the structure of the inscription is clear and it may be translated provisionally as: “S. and A. made (this altar base) for H.” soromš‎ and aslaš‎ appear to be nominal forms, perhaps the names of the donors of the monument. h(e)ktaonosi is the beneficiary, the person for whom the base was constructed. It is highlighted by virtue of its placement in sentence-initial position.

The Lemnian language is prominent in discussions of the origins of the Etruscans. The theory that has found some adherents, particularly in the linguistic community, is that the ancestors of the Etruscans arrived in Italy from the northern Aegean, perhaps from somewhere in the vicinity of the Black Sea, in the second half of the second millennium bce.6 The appearance of Lemnian, a language linguistically related to Etruscan, in this geographical area is cited as evidence in support of this idea and is, in the eyes of some, corroborated by the Greek historian Herodotus (I, 94), who relates that the Etruscans were descendants of the Lydians, inhabitants of Anatolia. However, the theory that prehistoric speakers of Etruscan migrated from the northern Aegean finds no support in the archaeological record of central Italy.7 Moreover, the linguistic evidence, although pointing to a genetic affiliation between Lemnian and Etruscan, does not speak clearly to the question of “origins,” which is further complicated by the addition of Raetic to this small family of languages.