Romans not only gave gifts to express emotion and build relationships; a long-standing tradition of mutual aid gave rise to more intensive exchange of gifts and services (or reciprocity), among relatives, friends, and business associates; from the wealthy to the public in the form of public benefactions; and in legally sanctioned relationships between patrons and clients. Roman gift culture, distinctive among its contemporary Mediterranean societies, became increasingly transactional from the middle Republic to early Empire.

Reciprocity, understood as the exchange of gifts and favours, was far more pervasive and consequential in Roman society than in the contemporary West. Romans lacked the social infrastructure of the modern state: insurance and social welfare systems. They were therefore more reliant on an ethic of sharing within the extended family (where everything was in spirit held in common) (communia omnia, Cic. Off. 1.54). Outside of the family, Romans also depended on reciprocity, a practice deeply rooted as essential for survival and flourishing.

The most common terms for gifts were donum and munus. Donum was a gift given fully voluntarily, munus in the course of a duty (Serv. ad Aen. 2.269). Liberalitas was the personal quality of being willing to give regularly to those in need, a concept based on the Greek notion of eleutheriotes that gained widespread currency in the mid-3rd century bce.1 Largitio usually signified the distribution of gifts.2

The basic ethic of reciprocity gave rise over time to a variety of institutions. The one most familiar to modern observers is gift giving on special occasions. At a dinner party, guests might receive a book or a bouquet of roses (Mart. 12.81, 14.1, 28, 70, and 71). Romans gave New Year’s gifts called strenae, or “good omens.” In Ovid’s day, these were commonly dates, figs, and honey; most valued and auspicious were coins (Fast. 1.185–192).3 On the Matronalia, mothers received gifts from their husbands, married women, and other men as well.4 Gifts on the Saturnalia could include writing tablets, dice, nuts, a pen case, a tooth pick, or a golden hairpin (Mart. 14.3, 14, 18, 19, 22, and 24) (Figure 1). 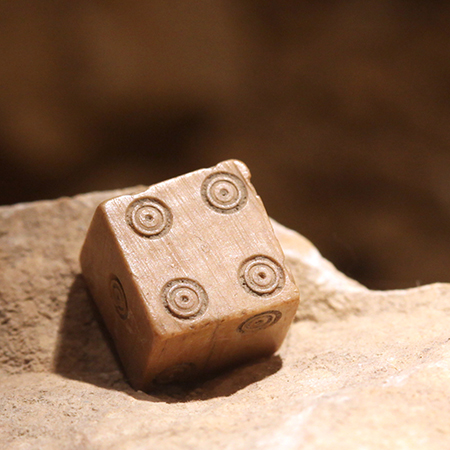 Trifling as they may seem, such gifts nevertheless helped form and maintain social bonds. More distinctive institutions show the importance of reciprocity in Roman culture more clearly. Roman friendship (see friendship, ritualized) was based on mutual affection and shared experiences but also on a regular exchange of services. Cicero, for example, recalls upon the death of Hortensius, a rival advocate and friend, “both pleasant companionship and a bond of many services exchanged” (consuetudine iucunda tum multorum officiorum coniunctione, Brut. 1). In his view, friendship necessarily included affection (amor, Amic. 26). Hospitium referred to a form of guest-friendship with members of other communities, usually wealthy men of equal status. A hospitium relationship might be initiated and renewed by a ceremony involving formal gift giving. Guest-friends conducted an ongoing exchange of valuable resources like money and grain, as well as services like aid in times of crisis.5

In the 21st century, bequests are usually considered to be a gift between generations: a benefactor passes on to heirs the wealth held or accumulated during a lifetime. In Rome, it became common for the wealthy to promise numerous legacies as favours while still alive. In 40 bce, the lex Falcidia raised limits on non-heir bequests from one-half to three-quarters of estates. The legislation both recognized the need to prevent heads of households from giving away their descendants’ inheritance and allowed the practice to grow by raising the cap.6

Public benefactions were a fixture of Roman civic life, with the wealthy providing public buildings, fora, and games. After the Punic Wars, when Rome saw a great influx of wealth from new provinces, the rich began to offer more lavish public benefactions, a practice which increased their prestige and became customary. Magistrates, notably aediles, were expected to use their personal funds to put on shows as a way of giving back to the community generously. Under the Empire, the princeps controlled public benefactions in the city of Rome, offering the most splendid games and constructions, while holding himself out as an example to elites elsewhere in Italy and the provinces.7 The emperor gave out gifts of money to the populace (congiaria) as well as to soldiers (donativa). Both came to be expected, to the point that, in the case of the donativa, emperors who failed to provide adequate gifts to the soldiery imperiled their reigns.

Romans engaged daily in exchanges with divinities that were central to their religious practice, from small sacrifices of grain, grapes, cakes, or honey to the Penates that guarded the home, to the civic sacrifice of an ox to Jupiter or a cow to Juno.8 These ritual sacrifices were conceived of partly as gift relationships, in which both mortal and divinity gave generously to one another, and as contractual relationships, with the divinity bound to uphold one end of a transaction with carefully defined obligations and benefits (do ut des, Dig. 19.5.1.).9

Reciprocity was of greater importance in Roman culture not only in comparison with the modern West but also in comparison with other ancient Mediterranean cultures. No Jewish or Greek observer claims for their societies what Cicero and Seneca do for Rome, that the exchange of benefactions was central to social cohesion.10 In fact, outside of interactions with the divine, practices of reciprocity were stoutly contested by influential voices within ancient Jewish culture.11

Greek society, with its heavy influence on Rome, had a closer resemblance, with equivalents to the institutions described above. Yet Rome had its own indigenous traditions of gift exchange, which became more thoroughly institutionalized than in Greece.12 Romans gave annual birthday gifts, whereas Greeks seem to have had no annual birthday celebrations.13

Most significantly, unlike Jewish and Greek societies, Romans had a legally recognized institution of patronage (see patronage, non-literary).14 Wealthy and powerful patrons participated in ongoing exchanges of gifts and favours with socially inferior clients. From the descriptions of the earliest forms of Roman patronage, patrons assisted clients in legal matters and the management of their financial affairs, while clients helped raise dowries for patrons’ daughters, provided ransoms if patrons were caught by enemies, and helped with financial losses in lawsuits (Dion. Hal. Ant. Rom. 2.9.1–2.10.2). Clients also received food, money, and clothing (Mart. 2.46, 8.28; Pers. 1.54), and gave other gifts to their patrons (Mart. 5.18).15

This traditional patronage relationship had remarkable social force. The elder Cato declared that patrons were second in honour only to fathers (Gell. NA 5.13.4). The antiquarian Aulus Gellius remarked that, in ancient Roman practice, obligations to clients were more binding than those towards guests and relations by blood and marriage, coming behind only obligations towards parents and wards (NA 5.13.2). Patronage became a major structuring principle in Roman society by joining wealthier and less wealthy Romans across what might otherwise have been thoroughly stratified classes. As Rome acquired new domains, the model of patronage was applied to relations with other nations, with emperors beginning from Augustus, along with other elites, assuming the role of patrons of whole communities under imperial control.16

The pervasiveness of relations of gifts and favours in Roman society meant that they were carried out for a variety of motives. Romans lacked the fully formed notion of selfless charity that would emerge with Christianity. They did, however, use gift exchanges to help one another in turn, thereby forming bonds of trust and affection, as in Cicero’s friendship with Hortensius.

At the same time, Romans also took a more instrumental view of gift giving. Reciprocity could be a means of pursuing individual interests valued for its particular properties. A Roman receiving a gift was delivered into a social relationship of mutual obligation, constrained by custom and social expectation, regardless of whether the gift was willingly accepted. The flexibility in quantity, type, and timing of any expected return service provided latitude to seek the greatest advantage in a return, especially for a socially superior giver. Consequently, receivers at times felt ensnared: Martial writes of gifts as fish hooks snagging their victims (5.18.7).

The true friendship Cicero prized could easily turn into relationships that were “political and for show,” as he says of some of his own (Att. 1.18). Cicero devotes a whole treatise to pure friendship because the word amicus not only meant what is denoted by the English word “friend,” but also a business “associate” and political “ally,” where the latter relationships were largely or wholly transactional.

Ambitus, or “going around,” was the Roman term for electoral bribery. In 181 bce, the lex Cornelia Baebia first allowed for criminal prosecution of those who tried to use gifts or favours to win public office. Subsequent laws followed, restricting bribery through intermediaries and other indirect means. The offence was only fitfully prosecuted, however, because it cut against long-standing traditions of reciprocity.17

Skillful givers among the wealthy could turn these traditions to political and military advantage on a large scale. When Julius Caesar borrowed tremendous amounts of money in the form of gifts to fuel the rise of his political career, the familiar notion of reciprocity lubricated the lending channels and came with the natural expectation that he would return the favour, in the form of political aid or otherwise. He used this money to offer splendid games and other public and private benefactions to build up his own prestige and authority.18 During the civil war that ended the Republic, before a critical battle in Spain, Caesar gathered money from his officers and redistributed it to his rank and file. With no cost to himself, he thereby ensured the fierce loyalty of both, with the average solider grateful for the gift and the officers dependent on the success of the battle to get their money back from the spoils (BCiv. 1.39). He was innovating within his overall use of presents to secure the loyalty of his troops (Suet. Iul. 38). Throughout the war, patronage was used by various potentates to organize their armed factions.19

The evidence suggests that Roman reciprocity grew more transactional from the early Republic down at least to the early Empire. Roman law recognized a number of so-called gratuitous contracts, which allowed for lawsuits if someone failed to properly perform a favour they had agreed to. The number of these suits allowed grew from the 3rd to the 1st centuries bce, first for failure to return money lent as a favour; then for failure to return any fungible objects, such as seeds; then for non-fungible objects like a plow; then eventually for services. These suits grew not only in type but also in number. As gift relations became more closely governed by contracts, they became inherently more transactional.20 Legal representation was traditionally performed as a favour by patrons. To preserve the practice, in 204 bce the lex Cincia prohibited payment or gifts-as-payment to legal advocates. By the late Republic advocates frequently received payments or gifts in contravention of the law. In the early Empire, the emperor Claudius decreed that legal representation could be compensated.21 Roman culture thus shifted away from its traditional dependence on reciprocity for managing interpersonal exchange towards a greater reliance on money and contract.